For the Committee on the Rights of the Child's State Review

This report was compiled by Climate Rights Ireland, a group of young people working with the support of UNICEF to investigate and report on how the climate crisis interacts with children’s rights in Ireland. We worked as a team of entirely young people, led by young people, to create a report for young people. This report was sent to the Committee for the Rights of the Child as part of the UNCRC state review of Ireland. We hope that this report will be a catalyst for change and drive a shift in Ireland’s performance on the climate crisis and children’s rights.

What we want from this report

We have included key recommendations under each Article for the change the Irish government ought to deliver. Ultimately, we want systemic change that places the rights of children and the planet at the forefront. We want justice, equity, and a sustainable society. Our aim is that future reports do not need to highlight these issues and that this report can act as a mechanism for this change to be delivered. 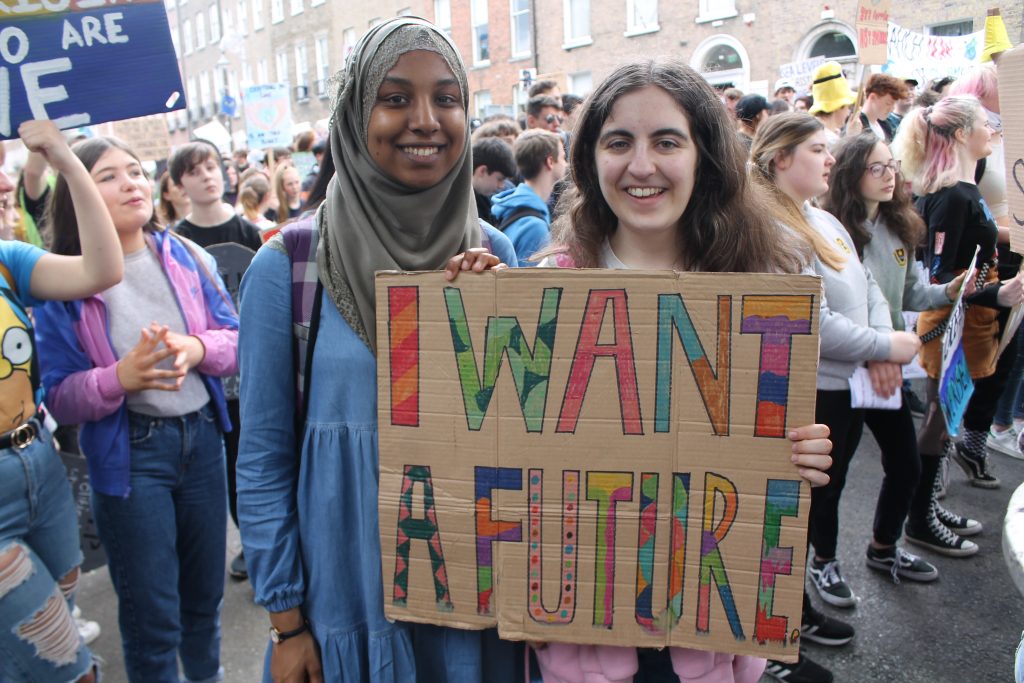 The Rural-Urban Divide and the Climate Crisis

This section focuses on the lived experience of children in Ireland regarding the climate crisis and the rural-urban divide.

We found a disproportionate impact of the climate crisis on rural areas, and a need for the provision of necessary resources for those who are affected.

We consulted young people on

The Impact of the Climate Crisis on Children in Rural Ireland. 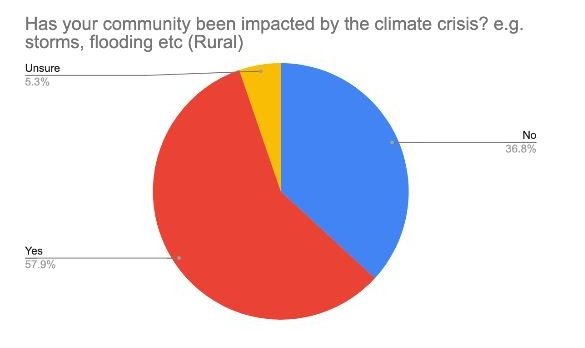 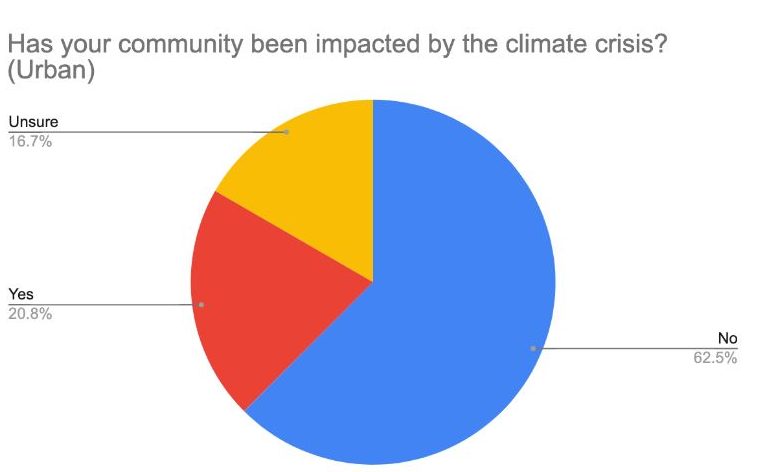 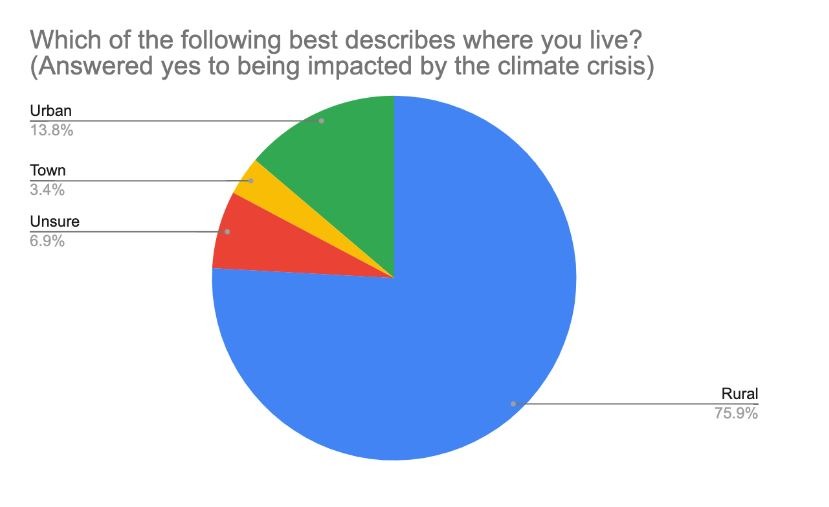 Support for young people in accessing resources and managing impacts 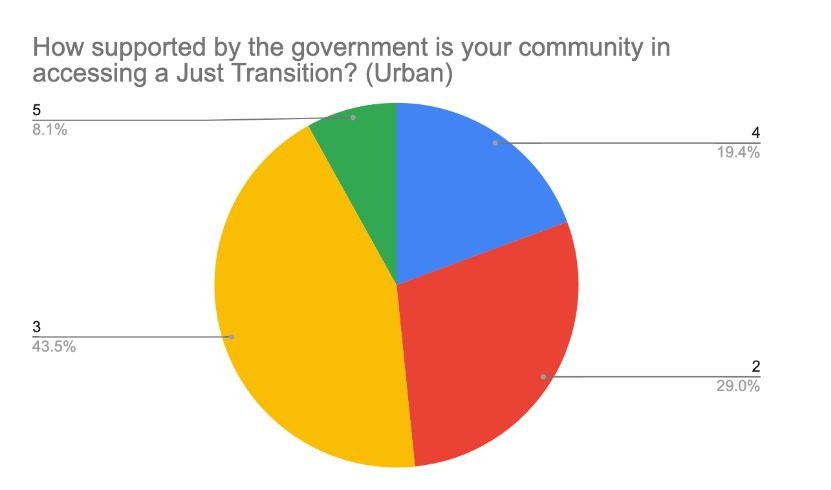 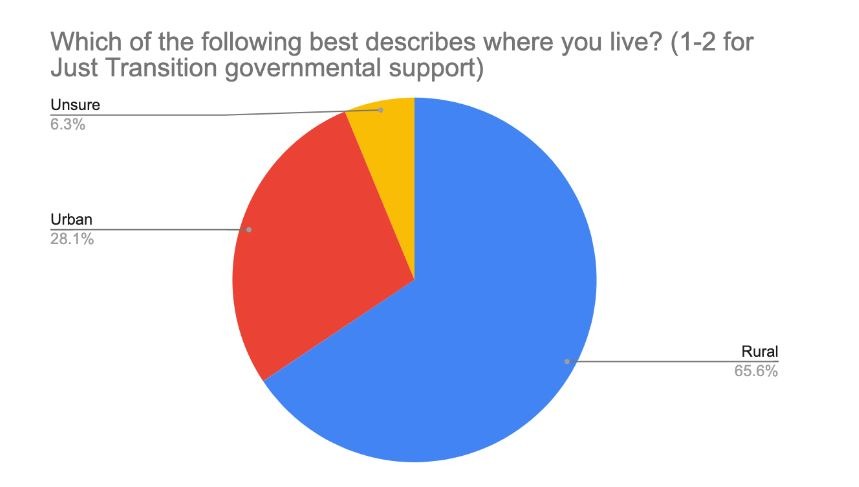 We believe our recommendations will work to reduce the disparity between rural and urban areas, and also increase the ability of children to access opportunities in education and employment.

Right to Survival and Development

The Impact of the Climate Crisis on Children’s Lives

In our research, 42% of children surveyed stated they had been impacted by the climate crisis (figure 1). This includes increased flooding across the country and extreme weather events such as Storm Ophelia.  Participants stated that weather conditions are negatively affecting their everyday lives. One participant stated that their crops are dying more frequently in the heat waves Ireland is experiencing. Another drew attention to flooding in Cork City, and how this has had a negative effect on their sense of safety as well as the local economy and livelihoods. Participants described excess waste of water in heatwaves, and heating in ‘freezing winters’, as well as increased anxiety as a result of experiencing these abnormal weather conditions.

As a result of this, children outlined a negative impact on their mental health and sense of security. Children outlined feelings of anxiety and a burden of responsibility as a result of a lack of action by current generations in power. They also stated they did not feel they were receiving adequate support, or that the government was taking adequate climate action which is compounding the negative impact on their mental health. Below are some of the ways children described this:

How, if at all, has the climate crisis impacted your mental health and feeling of security?

Alongside this impact on children’s mental health, we heard fears around their future and development. Children outlined feeling ‘helpless and hopeless’ stating ‘the future is honestly terrifying’. Members of the Focus Group outlined how climate change has impacted how they plan for the future. They stated that they are ‘unsure’ about what the planet will look like and that ‘climate change threatens the existence of my future’. Children asked ‘do I want to bring children into a world with climate change?’ when discussing their future, further illustrating the profound impact the climate crisis is having on their sense of security.

From this, it becomes clear that the climate crisis is causing a negative impact on children’s mental health and sense of security, which is being increased by a feeling of a lack of action.

Participants, overall, felt the government has not taken adequate action to stop the climate crisis, and mitigate its harm. Children outlined a need for action on the crisis as a whole, support to protect communities, and increased mental health support.

Participants outlined a lack of action from the Irish government in drastically lowering emissions, achieving climate justice, and tackling the roots of the crisis. A “burden of responsibility” was referenced by one child, who felt that our generation will have to be the ones to ‘clean up’ after this government does not take the action needed. Another stated this lack of action has caused them to “fear for the security” of themselves and their community. Participants’ feelings about the action taken by the Irish government to tackle the climate crisis are illustrated below:

Finally, building upon the impact of the climate crisis on children’s mental health, participants described a lack of adequate mental health support. This, coupled with a failure to take effective climate action, further damages children’s sense of security and safety.

Engagement of Children in Decision Making

The aim of this section is to illustrate, with the aid of statistics, how engaged and involved young people in Ireland feel in terms of climate action, climate policy, and decision making.

The data below illustrates that young people do not feel listened to in climate policy in Ireland. Where spaces are created, their input is not meaningfully taken onboard. These spaces can be inaccessible, tokenistic, and lack impact. These must be reformed to provide accessibility, accountability, and support, as outlined in our recommendations.

The key answer from Focus Groups and the survey about whether the government listened to young people was no.

80% of participants felt there were barriers preventing young people from being heard on the climate crisis.

Below are quotes from participants describing this issue:

The overwhelming call from participants was one for accountability, accessibility, and support to solve this issue.

The Irish government must be accountable to young people and translate their input into real policy, rather than a box-ticking exercise.

The government should provide clear and accessible mechanisms for young people to engage with their decision-makers.

Right as a refugee to protection and assistance

The Climate Crisis and Refugee Children in Ireland

This part of the report deals with the connection between the climate crisis and refugee children in Ireland, in particular children living in Direct Provision. To conduct our research, we met with members of Abolish Direct Provision (DP) to communicate the lived experience of children impacted in this area.

This report is the product of consultation with a large group of young people from across Ireland. It is imperative that young people, especially those who are not often heard by those in power, are engaged and consulted at every step along the way to a Just Transition.

It is clearly evident that adequate action is not being delivered in the four areas examined throughout this report. However, there is still time for a radical shift in the right direction. We have presented our ideas for change through our recommendations, and we ask that our government deliver upon these. Now, more than ever, we need an evolution in our way of thinking in order to deliver a better, brighter future. 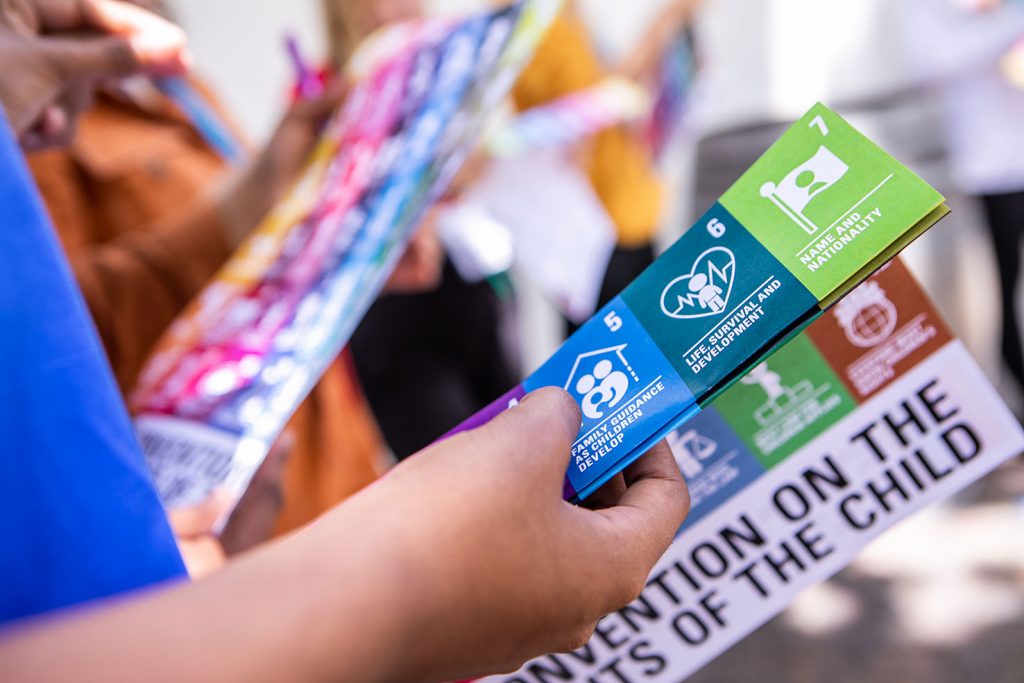 In order to make sure our data was as representative of the population as possible, including children of all backgrounds and levels of familiarity with the climate crisis, we collected research through a variety of methods.

We conducted a survey of children across Ireland regarding Articles 2, 6, and 12. The survey included questions around participation, impacts of the climate crisis, feelings of security, and much more. The full survey can be viewed here.

The survey was shared across youth activism networks as well as our social media page. With the aim of reaching young people not already involved in the climate movement, we reached out to organisations, that work with young people, who kindly shared our survey with their networks.

When we closed the survey, we validated all responses to ensure they were from young people and to avoid duplicate responses.

On August 16th, 2021, we held an online event with Focus Groups of young people from across Ireland to discuss Articles 2, 6, and 12. The Focus Groups were formed through an open sign-up online on our social media and shared with a variety of youth organisations.

The groups discussed Article 12 in the morning, and Articles 2 and 6 in the afternoon. Discussions were centered around prompt questions drafted by the group and evolved from these. We used collaborative online tools such as Mural to allow participants to work together in real-time. These virtual whiteboards were then used to ensure our data captured what the young people were saying to the best of our ability.

Other sources of data:

We received input from the ISSU Debate Your Decision-Makers event in April 2021 and conducted secondary research throughout this report.

Analysing and Compiling the Data: