Since 1963, UNICEF has worked alongside the government of Democratic Republic of Congo to promote the survival and development of children.

Find out how UNICEF works to drive change for children and young people’s rights in the DRC.

Help us fight Ebola in the DRC

Battling Ebola in the DRC

Since August 2018, the Democratic Republic of Congo has been battling an Ebola outbreak – making it the tenth outbreak in the country since 1976.

Children represent a large number among the confirmed cases of Ebola in this outbreak throughout the provinces of North Kivu and Ituri, and so UNICEF’s work has become all the more vital.

The response has been particularly challenging due to intense armed conflict and insecurity, however, UNICEF works tirelessly to help fight the spread of this deadly disease and reintegrate children that have been left behind.

From our work in the DRC, UNICEF has identified more than 400 children who have become orphaned or abandoned as a direct result of the Ebola outbreak.

Children who lose a parent due to Ebola are at risk of being stigmatized and isolated socially, alongside experiencing the grief of losing a loved one. Their wellbeing is our priority, alongside reducing the infection.

To make sure that all children are reached, we focus our efforts on improving water and sanitation, immunisation, nutrition and maternal care to improve the lives of young people in the most remote of areas.

We also focus our efforts on holistic psycho-social support and education to create a protective environment for young people. 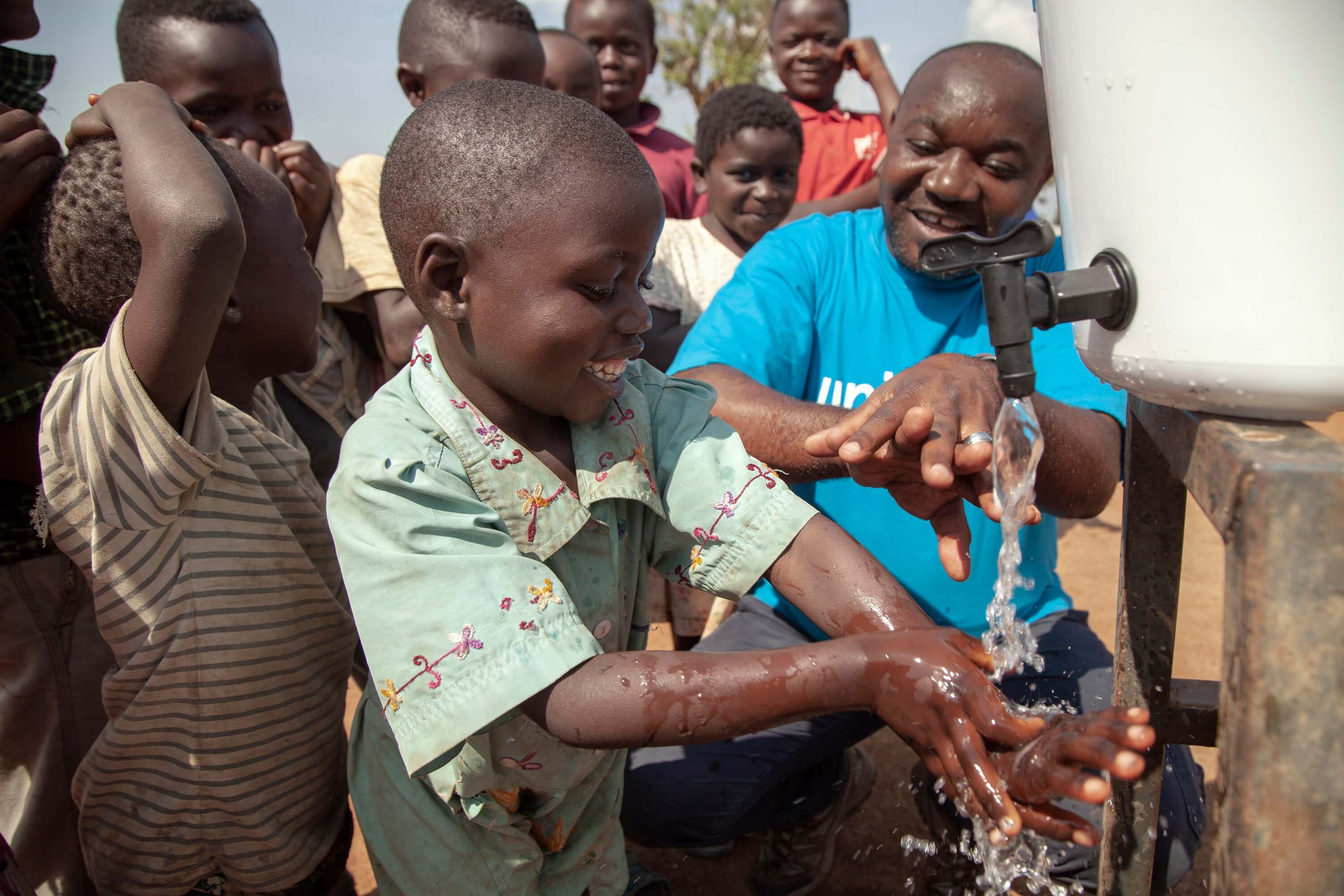 UNICEF’s WASH Officer, demonstrates to children how to correctly wash their hands in order to prevent the spread of Ebola | DRC | 2018 | Naftalin

Although we have made significant progress in the DRC, far too many children die before the age five, as a result of preventable diseases or illnesses, such as pneumonia, malaria and diarrhoea or neonatal complications.

We believe that every child deserves an equal chance to survive and thrive, reaching adulthood safely. For this reason, UNICEF is committed to reaching the most remote areas and vulnerable children through immunisation and improved maternal care efforts.

UNICEF is continually working with partners to vaccinate children against some of the most common diseases, namely poliomyelitis, maternal and neonatal tetanus and measles.

Our work also includes the fight to eliminate new HIV infections, through the mother-to-child transmission and the All-in! to end adolescent Aids initiative.

We’re also working to control and prevent the spread of the disease, and help affected families and their children, including children orphaned by Ebola.

UNICEF is also providing a protective environment for children in schools and nutrition assistance, including children and adults in Ebola Treatment Centers. 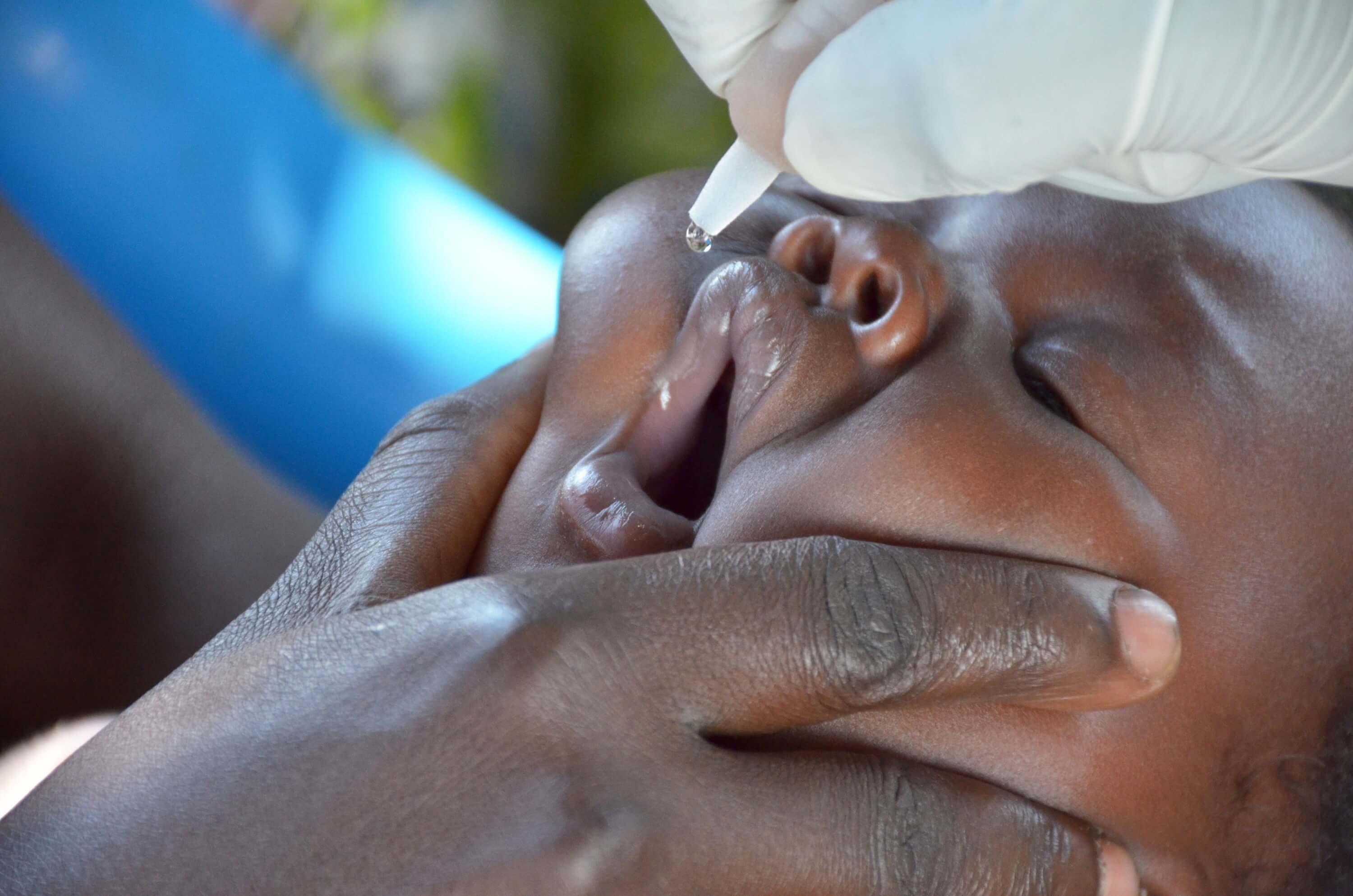 As part of fighting the spread of Ebola, UNICEF plays a role in reducing child mortality and improving the care of mothers. Too many mothers, new-borns and adolescents are at risk due to preventable or treatable diseases such as neonatal complications, pneumonia, malaria and diarrhoea.

We believe that healthy children become healthy adults, improving their living conditions, as well as those of their communities and their country.

The UNICEF Child survival programme aims at reducing maternal, newborn and child mortalities by improving the delivery and newborn care and fighting preventable diseases that are accountable for child deaths. 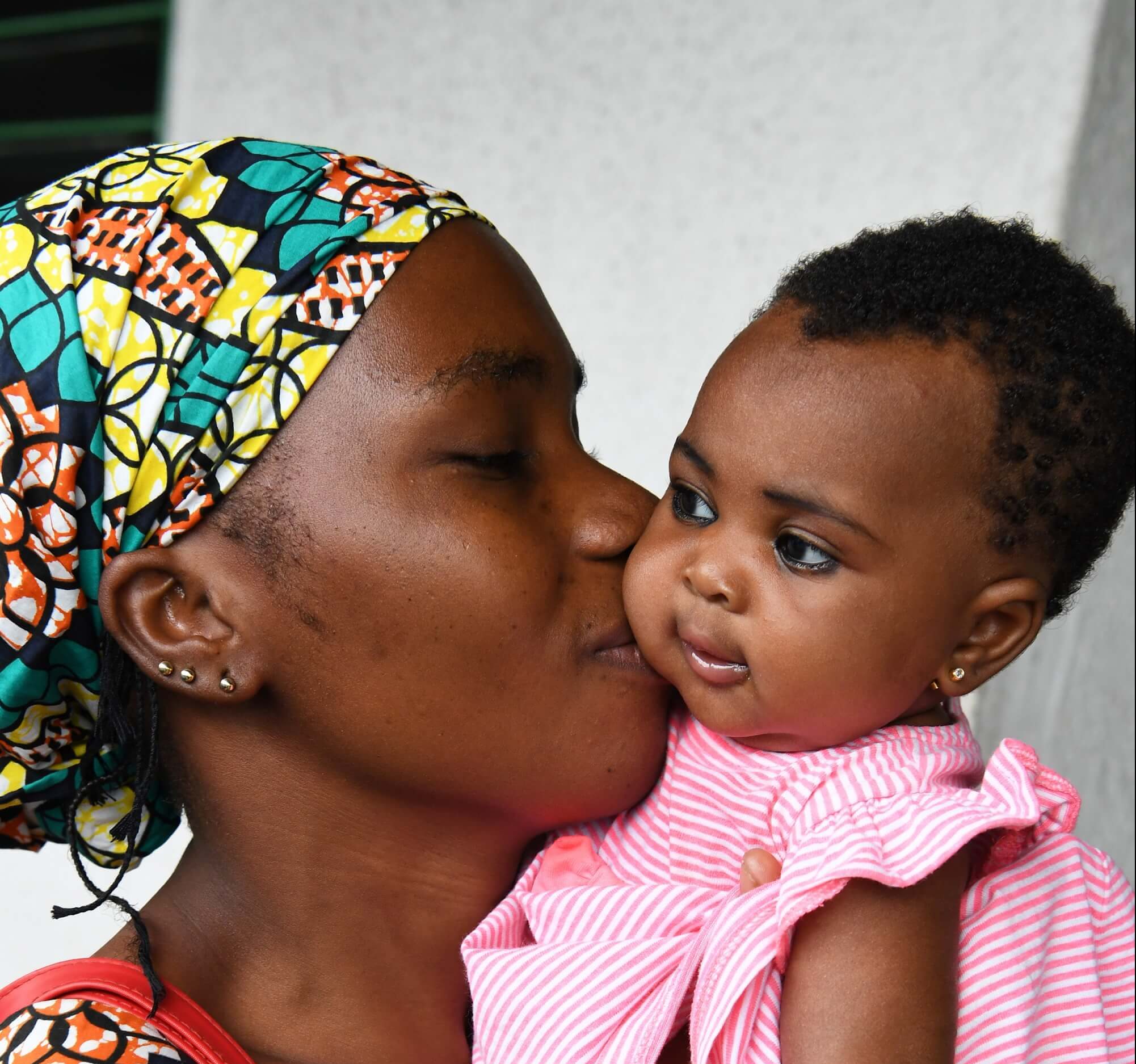 Child Mortality in the DRC 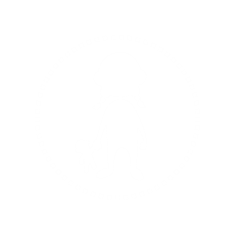 Children in the DRC Die Before Reaching the Age of 5

In the country, nearly one out of every two children under five suffers from chronic malnutrition or stunted growth, which affects their brain development, reduces their IQ, and weakens their immune system. In 2017, food security and nutrition levels sharply deteriorated, with one in ten children becoming severely malnourished and in danger of death.

During the first 1,000 days of childhood, from the time of pregnancy on the second birthday of the young child, children should benefit from direct nutrition interventions in terms of adequate food intake, good care, health, nutrition and hygiene.

There is great potential for the DRC and improved sanitation, as the country contains over 50% of the African continent’s water reserves. Despite sustained efforts however, only 52% of the population has access to an improved water source.

We make it our mission at UNICEF to improving water quality in the DRC and ensure that every child has access to safe drinking water, adequate sanitation facilities in schools and communities.

In the realm of emergencies, UNICEF supports the fight against cholera and Ebola by increasing access to safe drinking water, ensuring the availability of water treatment products and rehabilitating and redeveloping water points. Emergency interventions are carried out for displaced persons and host communities.

Through the national program “Healthy School” and Village for example, UNICEF works to prevent diarrheal and other waterborne diseases. Having made significant progress, over 7 million people and nearly 1 million schoolchildren have benefited from improved water and sanitation, and since 2018, health centres have been integrated into the program. 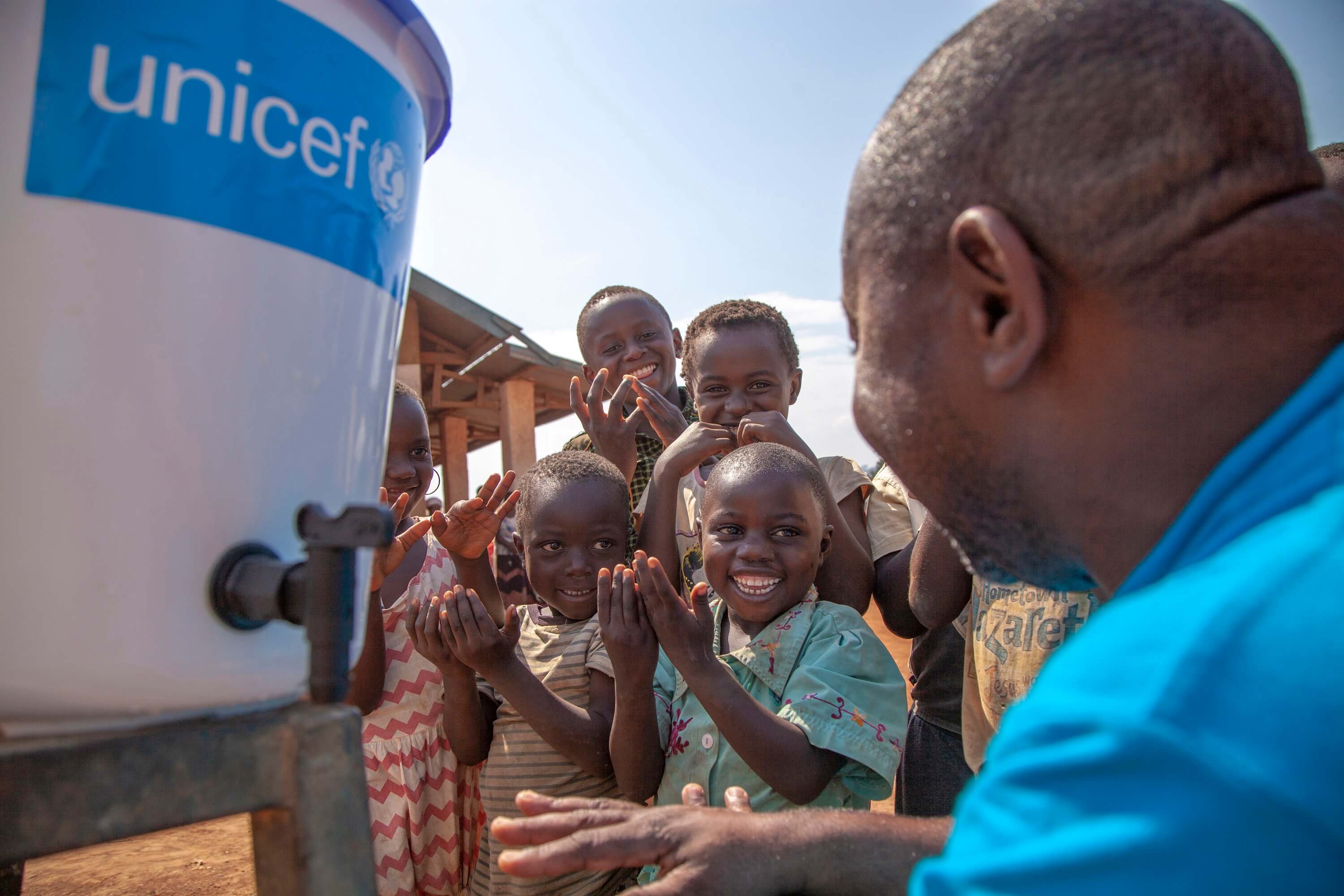 We believe that every child has the right to an education, no matter the circumstances that they are born into.

Education offers children a ladder out of poverty and a path to a promising future. But, in the Democratic Republic of Congo (DRC) nearly 7 million children aged 5 to 17 are out of school.

The Ebola outbreak has meant that basic services such as education are far harder to access, with the impact of the disease overturning the daily lives of communities – affecting all from parents, caregivers to teachers.

UNICEF is helping to fight the spread of this deadly disease and educate people on how to prevent contamination. Our work is vital in teaching the youngest members of communities how to raise awareness on Ebola and help keep their environment free from the disease.

We pledge to allow children affected by extreme poverty to have access to quality primary education, as UNICEF believe these first stages are crucial in creating a better tomorrow.

Give children in the DRC the childhood they deserve