After nine years of violence, the Syrian crisis remains one of the world’s worst humanitarian emergencies. Inside Syria, 4.7 million children need humanitarian support.

The needs of Syria’s children are immense and complex. Years of conflict have reduced access to basic social services. Only half of all health facilities are still functioning. Right now, 3.1 million children need nutritional support.

Grave violations of children’s rights and violations of international humanitarian law continue, with children killed and injured by the persistent use of explosive weapons in civilian areas and recruited into armed conflict. While the destruction of education facilities has left 2.1 million children out of school and at risk of becoming a lost generation.

Children Forced From Their Homes

The ongoing conflict in Syria has created the largest displacement crisis in the world. Right now, 2.6 million children are internally displaced in Syria while 5.6 million people are registered as refugees, including over 2.5 million children, in Turkey, Lebanon, Jordan, Iraq and Egypt.

Life in a refugee or displacement camp is no place for a child. Often overcrowded and unsanitary camps lack basic services and children routinely miss out on essential health care and education. Over 800,000 refugee children are out of school, that’s 32% of the total registered refugee population. 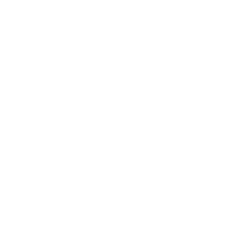 SYRIAN CHILDREN HAVE GROWN UP ONLY KNOWING WAR

Our teams are on the ground inside Syria and in neighbouring countries. We deliver urgent supplies of life-saving food, medicine and clean water, even in the hardest to reach areas.

Our work provides critical services like health care, to ensure children get the help they need when they need it most. We provide child protection services to protect the most vulnerable from exploitation and abuse.

We are rebuilding schools and classrooms, setting up temporary schools and delivering education supplies to ensure children can continuing learning and don’t miss out on an education.

Your support makes it possible. Our work is funded entirely through voluntary contributions. Consider making a donation today and help deliver lifesaving supplies and support to Syria’s children.

Today 7.9 million Syrians are food insecure, which means they don’t have access to a sufficient amount of food on a daily basis. Without access to food and healthcare Syrian children are at risk of malnutrition and its devastating consequences.

Last year, UNICEF screened more than 1.8 million children for malnutrition. Malnutrition is an extremely dangerous condition that can have irreversible consequences for a child’s development, leading to stunting.

Poor nutrition can severely impair a child’s cognitive function and increase the risk of nutrition-related chronic diseases in adult life.

This is why it’s imperative that no child goes without much-needed vitamins, minerals and nutrients.

This year UNICEF will need to screen 2.5 million children and pregnant and lactating women for malnutrition. We will need to reach 4.37 million people with nutritional supplies, including those in the hardest to reach areas. 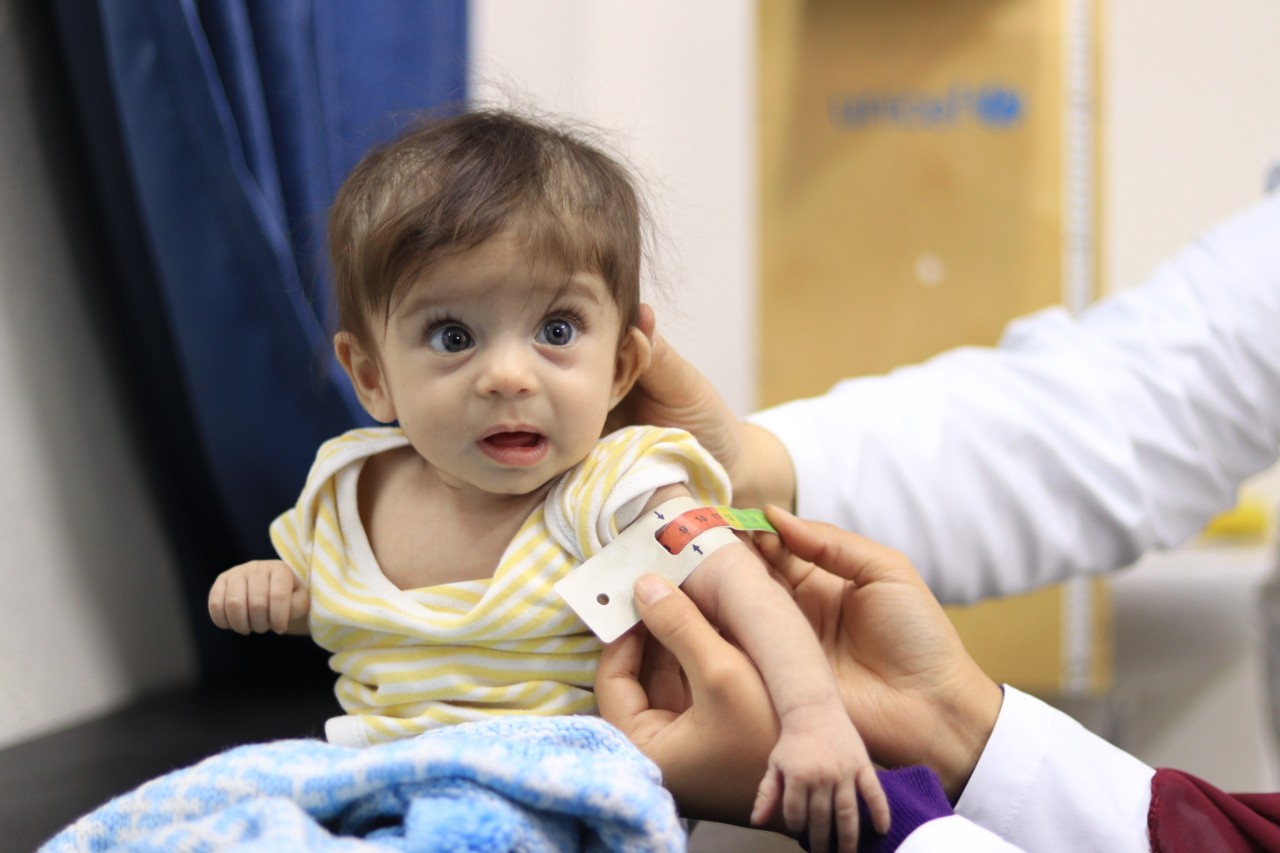 Seven-months old Janna is suffering from severe acute malnutrition. She was screened at a UNICEF supported health clinic in Aleppo. The clinic reaches 500 children every week with health and nutritional services. Jana was put on a treatment of therapeutic food and is slowly beginning to recover. She will continue to receive her supplies and follow up care at the clinic until she makes a full recovery.

Education is key to children escaping a life of poverty. Girls are particularly vulnerable when their education is limited or halted.

Girls who are out-of-school are more susceptible to child or forced-marriage. Child marriage robs girls of their future and forces them to relinquish their childhood.

Natural disasters and conflicts threaten children’s futures by taking away their schools and their education – nearly 1 in 4 out-of-school children live in crisis-affected countries.

In Syria, the ongoing war has caused the widespread destruction of the nation’s educational infrastructure.

UNICEF is working with its partners to establish schools and Kindergartens in Syria, and refugee camps throughout the region. 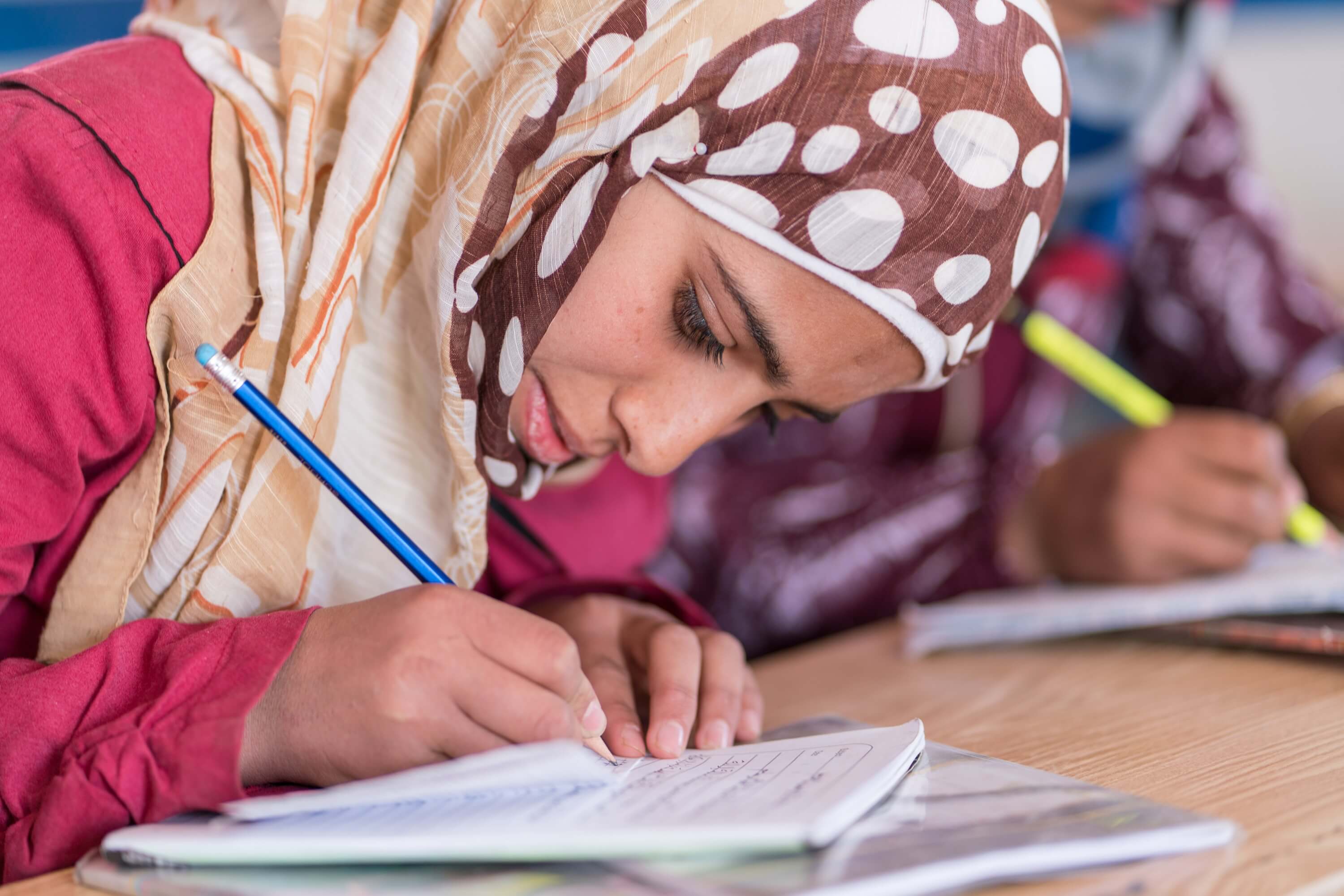 Syria, and its surrounding neighbours boast a versatile climate, with scorching summers, and bitterly cold winters.

With many families having fled with nothing but the clothes on their back, thousands of refugees are ill-equipped to deal with extreme weather conditions.

With children already living in poor, cramped and uncomfortable conditions, it’s important that they have the right clothing to keep warm and dry the winter months.

Because of this, UNICEF has distributed thousands of summer and winter clothes kits to children inside Syria and throughout refugee camps in neighbouring countries.

Each kit contains 10 pieces of clothing, such as sports shoes, hat, cotton sweater, underwear, T-shirt, socks and jeans. In winter children will be given appropriate outerwear and strong boots. 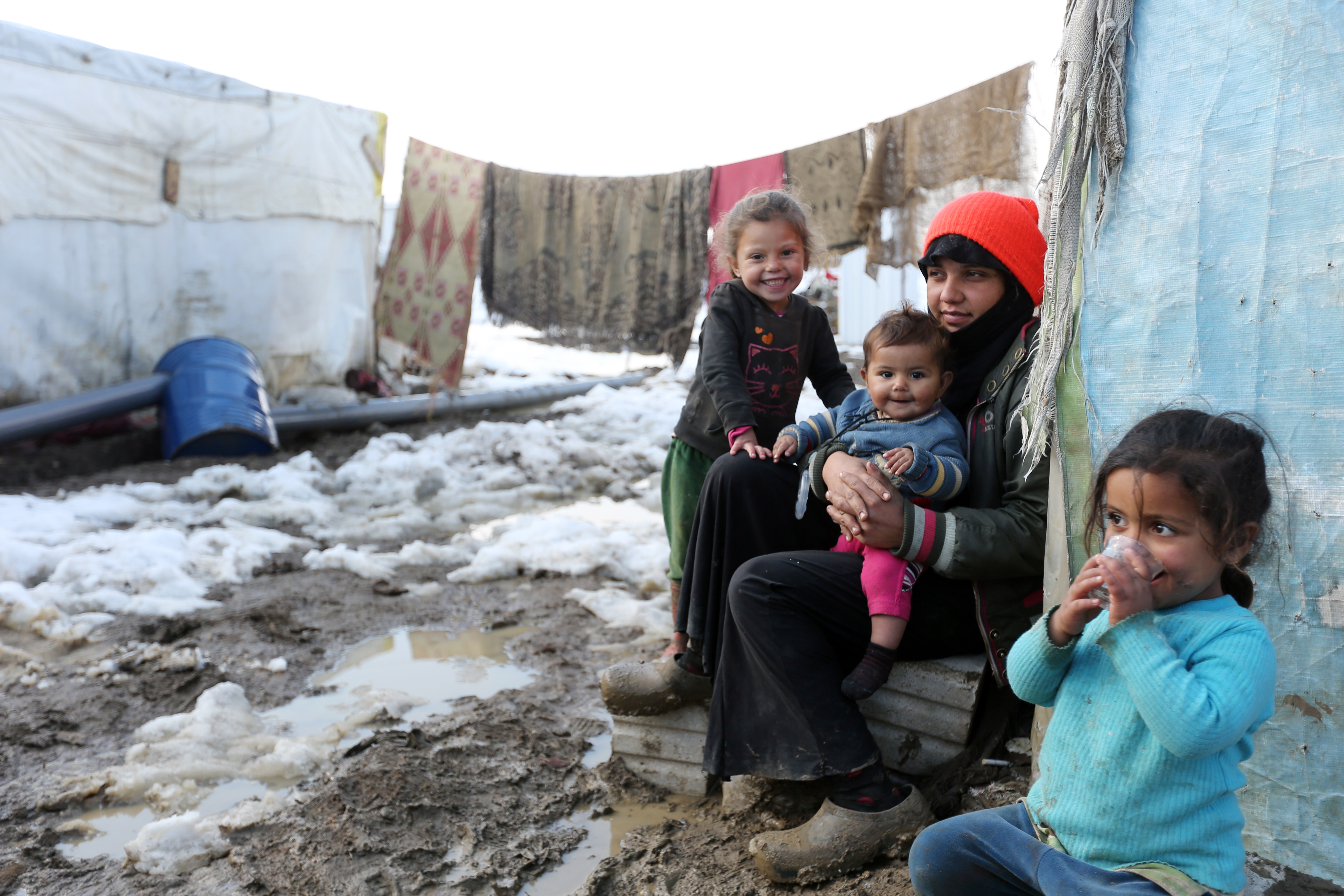 A Syrian family pictured outside their tent home in an informal settlement for Syrian refugees in Lebanon's Beeka valley. "I will never forget one little girl called Malak. She was still shaking from the memories of the winter storm after the tent she lives in collapsed on her head as she slept. She had to crawl in the darkness to find safety. All of her belongings had been spoiled by the rain and she had no dry clothes. We gave Malak a winter clothing kit. She was so happy and insisted on carrying her own boxes even though they were taller than her. She couldn’t stop smiling as she tried on her new jacket and boots." Ettie Higgins, UNICEF Deputy Representative Jordan.

How Your Donations Help Children

Rimas, is five and a half years old, which is almost as old as the place she calls home –Za’atari Refugee Camp.

Born in Za’atari Refugee Camp, Rimas belongs to the first generation of children who know nothing but life inside the camp. Currently there are over 44,000 children leaving in the camp.

Fatima, Rimas’ mother, explains the difficult journey the family had to make from Syria, while she was pregnant with Rimas.

“We walked the last few miles to the border. It was difficult with the bags and the baby inside me,” explains Fatima.

“It was about two and a half months before the due date. She was very small and thin. Many people said she would not survive.

“Thank God, five years later, Rimas has grown up to become such a sweet girl,” says her proud mother.” 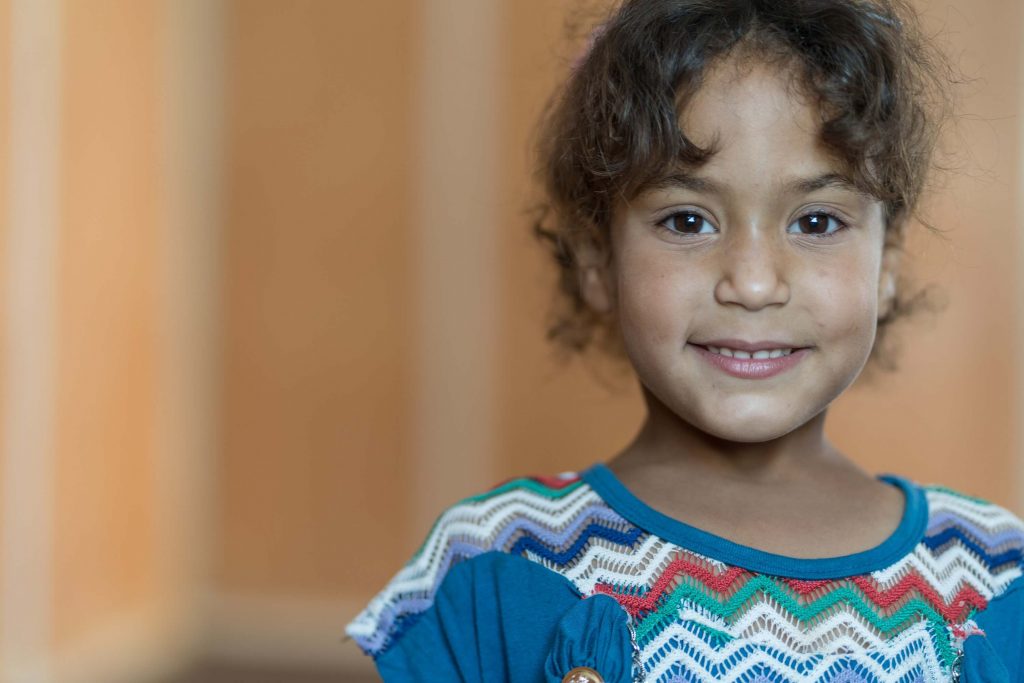 Today Rimas is registering for Kindergarten in a UNICEF-supported school. Despite everything, Rima’s mother is committed to her children’s education.

“Many people in Syria are gone, including doctors and teachers. And the new generation is not getting the education they need and that is sad. The key to a good education is to start early with the children so they can start learning from a young age.

“I told Rimas that we needed to go and register her in Kindergarten. Her response was ‘Really Mom? Let’s go!’”

Rimas gives her first day in Kindergarten a big ‘thumbs up’. “They teach us everything here, like the alphabet, and we get to play. And they teach us how to say ‘Meow’! Meow! Meow!”

Rimas already has big dreams for her future and she knows how to achieve them. “If I want to become a doctor, we must start studying.” 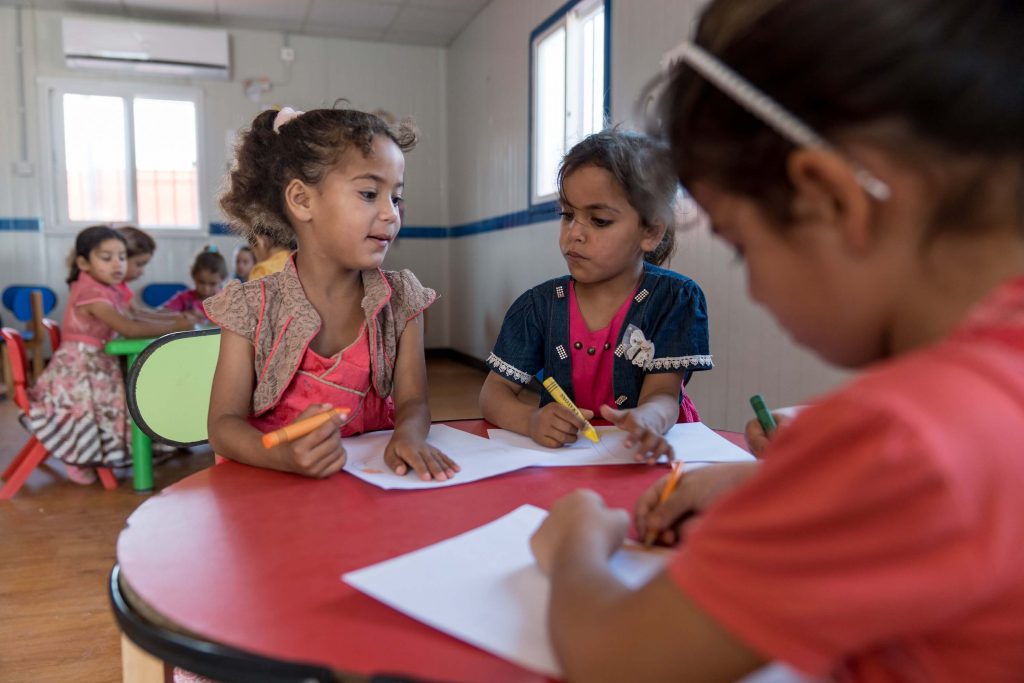 Rimas attends Kindergarten with her friends

It’s thanks to your donation, that Rimas can attend Kindergarten and begin her education. Currently, 1,100 children are attending Kindergarten in Za’atari but more than 80 per cent of children aged 4 and 5 years in the camp have no access to school.

At least 48 new classrooms are needed to ensure every child can have the best start to their education.

UNICEF has been on the ground in Za’atari Refugee Camp since it opened in 2012, providing WASH, protection, education, health and nutrition, youth and adolescent services and social protection for the over 44,000 children who live there and their families.

Learn More About Our Work in Syria

THE WAR IN THEIR OWN WORDS

How the War Started

NINE OF YEARS OF HELL FOR CHILDREN

WHAT WINTER MEANS FOR CHILDREN

Give the Gift of Warmth