The Importance of Good Nutrition

Good nutrition is critical to child survival, health and development. Children who are well nourished are better able to grow and learn, to participate in and contribute to their communities, and to be resilient in the face of disease, disasters, and other global crises.

Nutrition is a lifelong issue. The effects of poor nutrition begin in the womb, continue well into adulthood, and cycle across generations. While malnutrition can trap generations of children in a cycle of poverty, good nutrition, particularly in infancy, is the building block for future health and development.

But for the millions of children suffering from malnutrition, the reality is stark. Every year, around 3 million children die due to under nutrition. For millions more, chronic malnutrition will result in stunting – an irreversible condition that literally stunts the physical and cognitive growth of children. The good news is that we can change this.

The first 1,000 days from the start of a woman’s pregnancy to a child’s second birthday offer an extraordinary window of opportunity to prevent malnutrition and its devastating consequences.

UNICEF focuses its programmes to this critical period, including support for breastfeeding, appropriate complementary foods for infants over 6 months, micro nutrient supplementation for women and children to address deficiencies and therapeutic and emergency food to treat malnutrition in children. 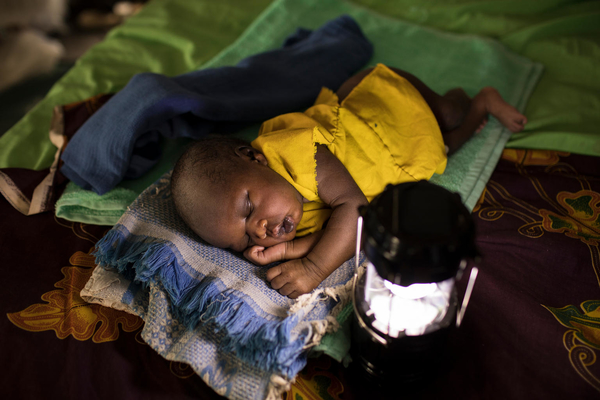 Sunday's baby was delivered in a UNICEF supported health centre in south Sudan. By making sure babies like Sunday's, have the best nutrition and care from the very start we can make sure they grow up to be healthy, strong and resilient.

Malnutrition is more than a lack of food – it is a combination of factors: insufficient protein, energy and micronutrients, frequent infections or disease, poor care and feeding practices, inadequate health services, and poor water and sanitation.

Stunting: a child who never reaches full physical and mental development due to poverty, poor sanitation, lack of breastfeeding and limited access to nutritious foods.

A child rendered blind by vitamin A deficiency

A child who becomes obese through overconsumption of low-quality food

What is Severe Acute Malnutrition and how is it treated?

Severe acute malnutrition is the most extreme and visible form of undernutrition. Its face is a child – frail and skeletal – who requires urgent treatment to survive.

Ready-to-use therapeutic food (RUTF) is a high-energy, micronutrient enhanced paste used to treat children under age 5 who are affected by severe acute malnutrition.  RUTF does not need to be cooked or prepared before consumption. This makes it a practical solution where cooking facilities and fuel are limited. RUTF has a long shelf life and is safe for use even in the absence of clean drinking water. 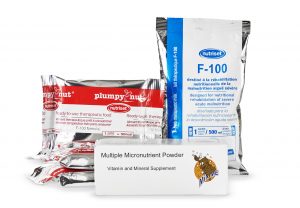 No amount of food can cure a stunted child. Good nutrition must start early to prevent stunting before it starts. Chronic malnutrition early in life leads to stunting, which prevents children’s bodies and brains from growing to reach their full potential. The damage caused by stunting is irreversible and has far reaching consequences, from diminished learning and school performance, to lower future earnings.

How can we end malnutrition?

The effects of malnutrition, or not having the right nutrients, can have devastating long term consequences for children.

It can cause irreversible damage to a child’s brain development, immune system and physical growth.

And severe acute malnutrition, which is when a child weighs 70% below the normal healthy weight, can have devastating effects on children such as wasting, suffering from oedema or stunting.

With help from people like you, UNICEF has reduced the number of children who are stunted from malnutrition by nearly 100 million since 1990.

“When I first went to the nutrition center, I was hopeless. I said, ‘No one can help my son. He’s going to die.’ But after two visits, he improved.” Afrah and her children were displaced by conflict in Iraq. Nine months ago her youngest child, Ali was diagnosed with severe acute malnutrition. Today he’s a healthy and thriving fourteen-month-old child. This photo collage shows his progress over time and the impact of life saving food. 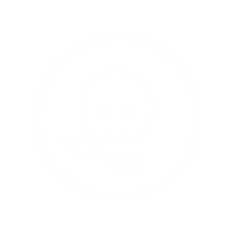 7-month old Umara was thin and listless when his mother Fanna brought him to a UNICEF-supported medical clinic. He rests his head against his mother’s shoulder as she carries him in her arms.

They had to flee from their village in Borno state, northeast Nigeria, due to the ongoing Boko Haram-related crisis. They now live in an IDP (internally displaced persons) camp in the state capital, Maiduguri.

Fanna says Umara’s been ill for the past few weeks. He was physically showing signs of severe acute malnutrition. The bones on his chest and back are prominent; his skin is loose around his arms and legs.

Umara was assessed by UNICEF staff who use a MUAC band (Mid-Upper Arm Circumference) to measure Umara’s nutritional status quickly and efficiently.

Umara was immediately given life-saving treatment – Ready-to-Use Therapeutic Food (RUFT), also known as ‘plumpy nut’. This is a peanut-based paste that’s high in calories and full of added vitamins and minerals. Three packets a day, for eight weeks, can save the life of a child like Umara.

A week after the UNICEF teams met Umara, he was back at the clinic for his second screening. There was a small, but steady improvement.

Even though he is still classified as severely malnourished, the improvement, both physically and in terms of his general well-being, made staff optimistic that he will make a full recovery.

No child should be dying or suffering from the consequences of becoming malnourish. Especially not when simple, affordable and efficient solutions like plumpy nut are available.

With the help of our supporters, UNICEF is determined to reach as many children like Umara so that no child is left behind. 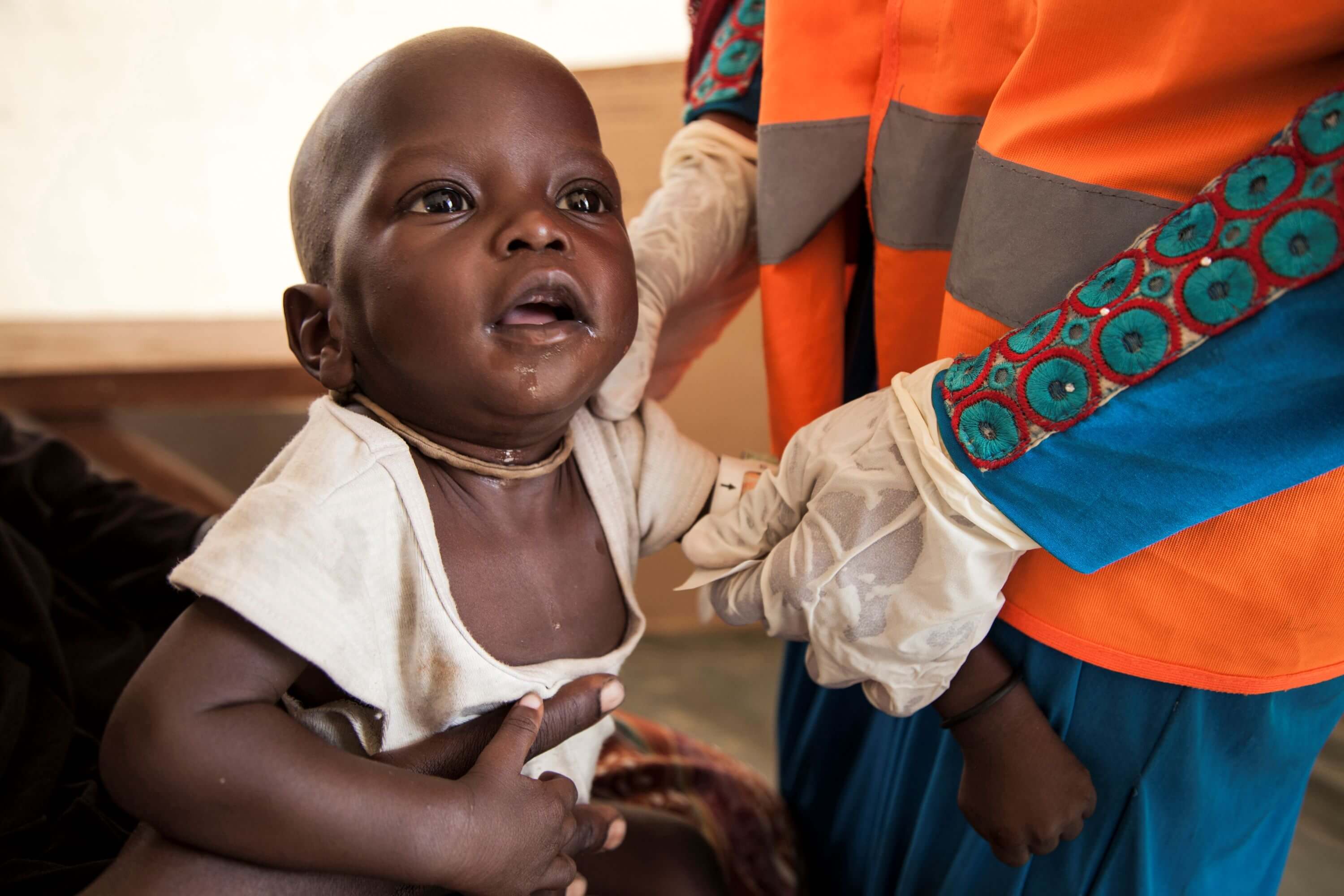 7 month old Umara is assessed for malnutrition by a UNICEF Nutrition Officer at a UNICEF supported health clinic at an IDP camp in northeast Nigeria. Nigeria | 2016 | Vittozzi |

UNICEF supplies 80% of the world's life saving therapeutic food. Join our community of Global Parents and help fight hunger. Together we can give every child the chance to not only survive but thrive too.

The Game Changer in the Fight Against Hunger

6 Things You Should Know