One in every three people infected by Ebola in the Democratic Republic of Congo (DRC) is a child.

As a proud UNICEF Ambassador, I recently visited the country to witness the devastating impact the virus is having on children, their families and communities.

Right now, the DRC is experiencing the second-largest Ebola outbreak in history. In less than a year, there have been over 2,500 cases, with a near 70% fatality rate. 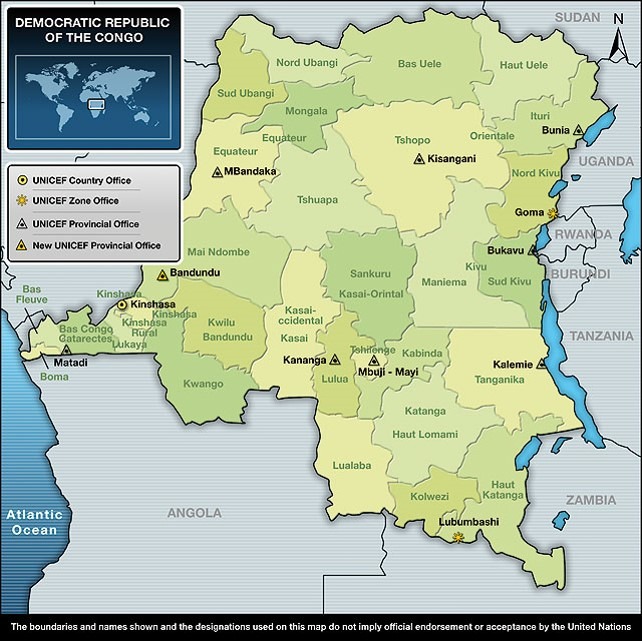 There are real fears that the virus could spread throughout the region and beyond. Just after we arrived in the DRC we heard of the first cases in neighbouring Uganda. And following my return home, an emergency of international significance was declared when the disease reached the city of Goma for the first time. I travelled with UNICEF’s specialist child protection teams, who are at the forefront of trying to contain Ebola.

I didn’t fully know what to expect. For me, and I’d say most people, the word Ebola evokes horrible memories of previous deadly outbreaks in Africa.

The epicentre of this outbreak is in the eastern province of North Kivu. This area is extremely volatile. There are over 25 competing armed groups, and even health workers have come under attack. 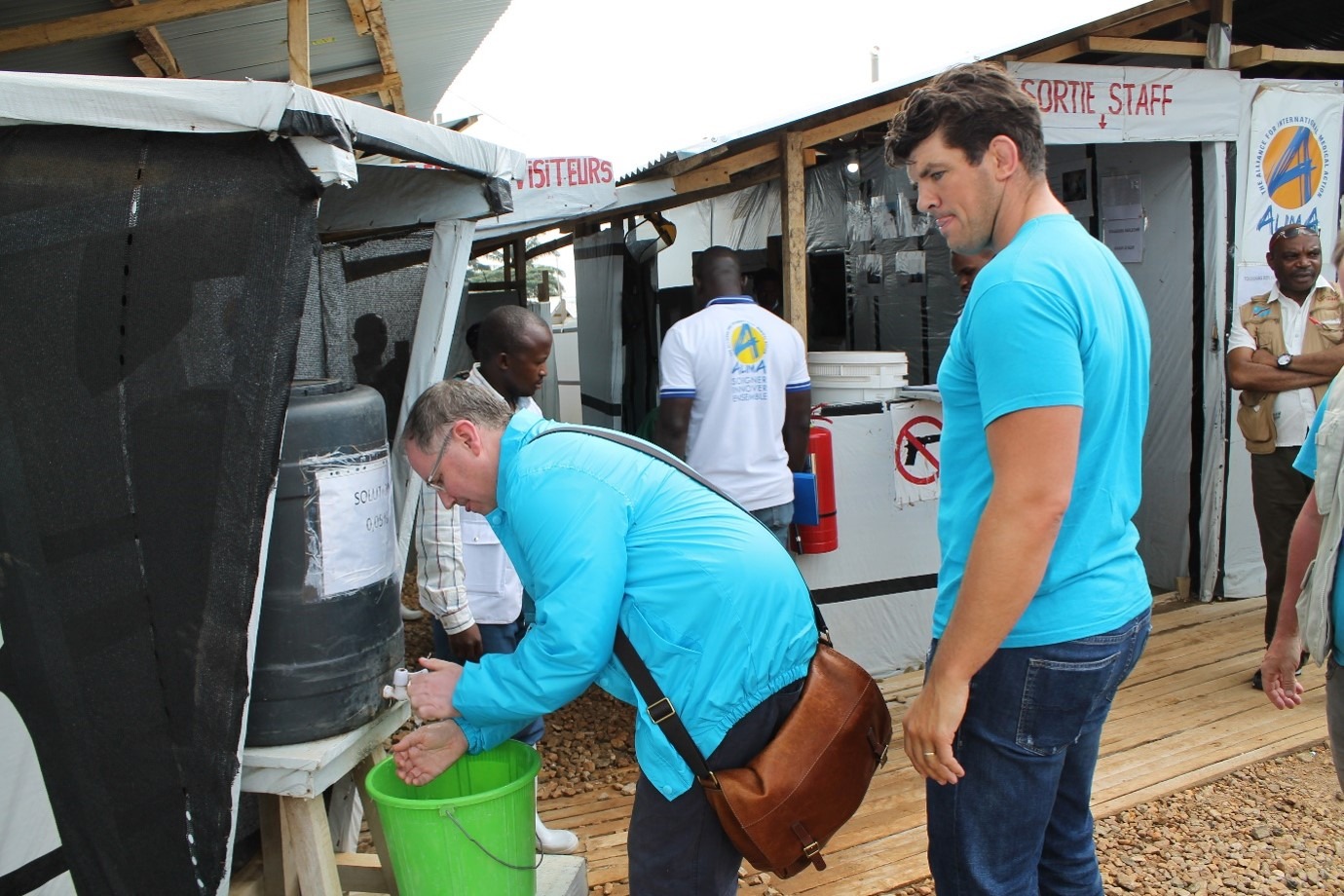 Ebola is spread through bodily fluids and primarily through person to person contact. Everywhere we went in the country we had to wash our hands, as well as the bottom of our shoes.

You also see very little physical contact in many areas. When we met someone we touched elbows, instead of shaking hands.

Fever is often one of the first symptoms to appear. So your temperature is taken at the airport flying in and out, as well as at many other official locations.

When we arrived in the city of Beni we spoke to UNICEF teams and government health officials and they described the frightening scale of the current outbreak.

When you hear that nearly 70% of the people infected die. And that in many cases the percentage can actually be higher for children, it really hits you how severe this crisis is. 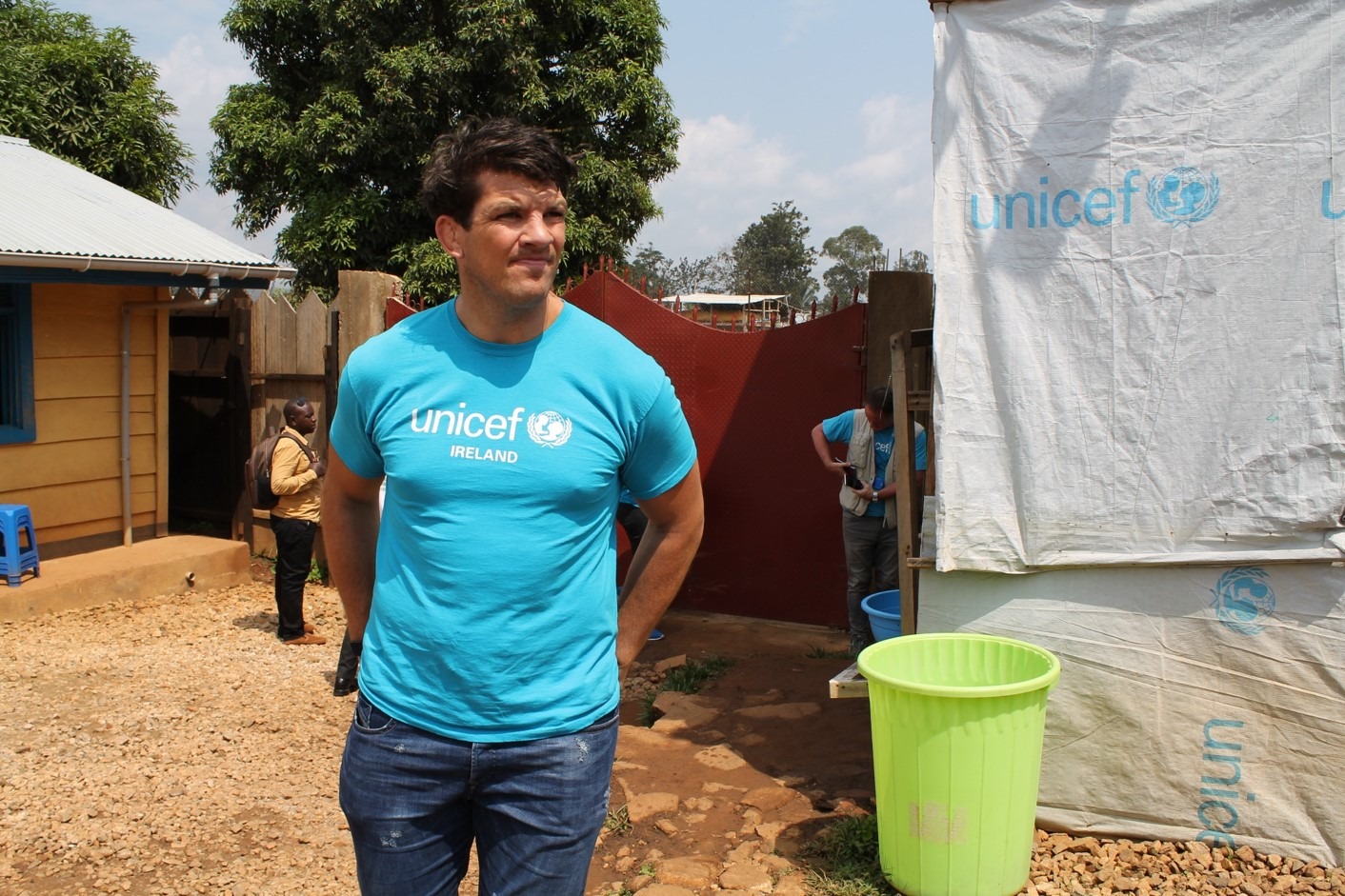 When we arrived in the city of Beni we spoke to UNICEF teams and government health officials and they described the frightening scale of the current outbreak.

When you hear that nearly 70% of the people infected die, and that in many cases the percentage can actually be higher for children, it really hits you how severe this crisis is. 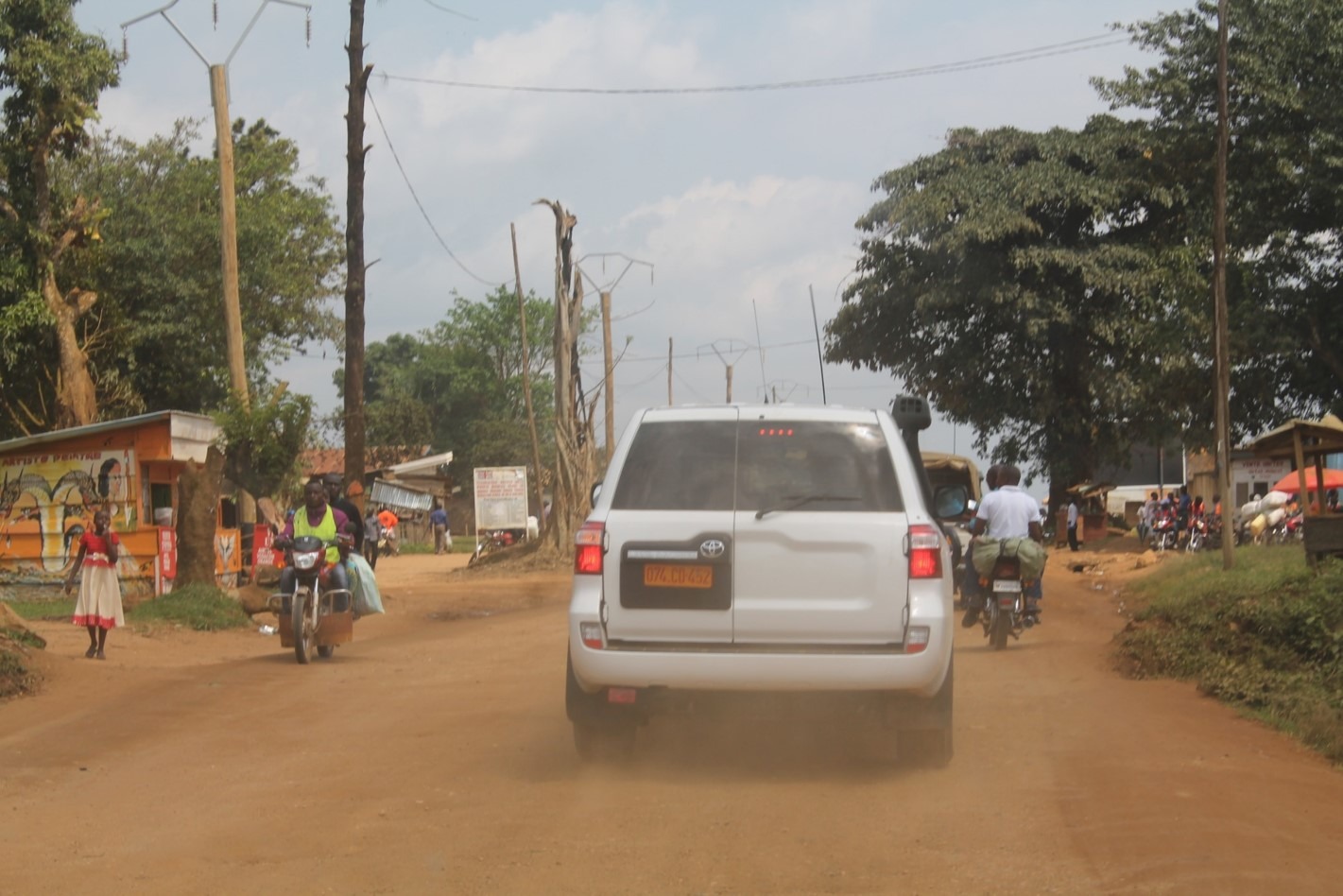 One of the first things we received after we landed was a security briefing. This really hammered home the difficulties UNICEF workers face day in day out. Everywhere we went had a strict curfew.

We couldn’t go anywhere after dark. And in recent months there’s been a number of attacks on health centres – with many armed groups openly hostile to the teams working to get the virus under control. 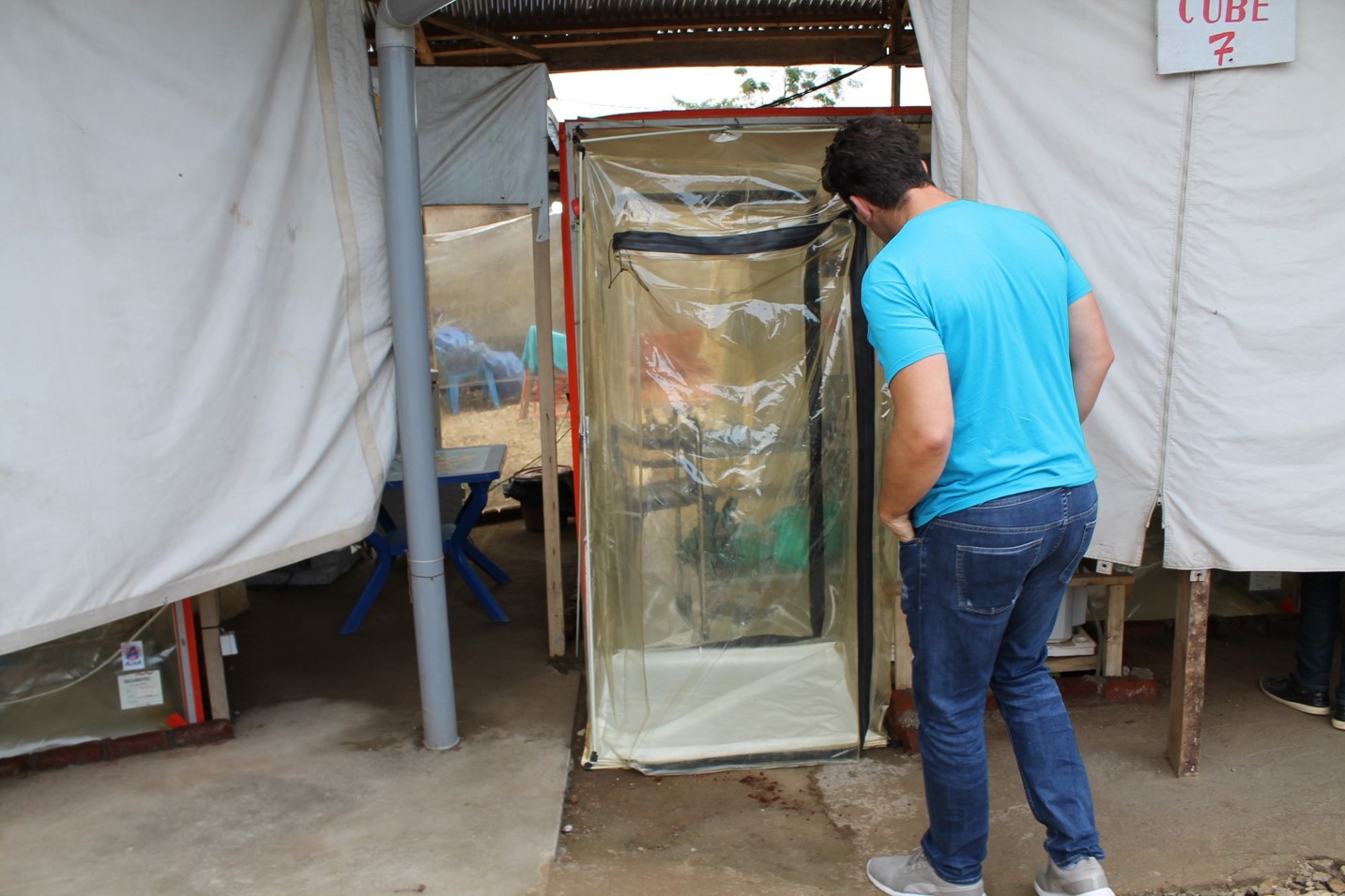 In Beni, the first place we visited was an Ebola Treatment Centre.

This is basically an intensive care facility for children and adults infected by the virus. Patients are kept in totally concealed plastic cubes, with no physical contact with their family and friends. 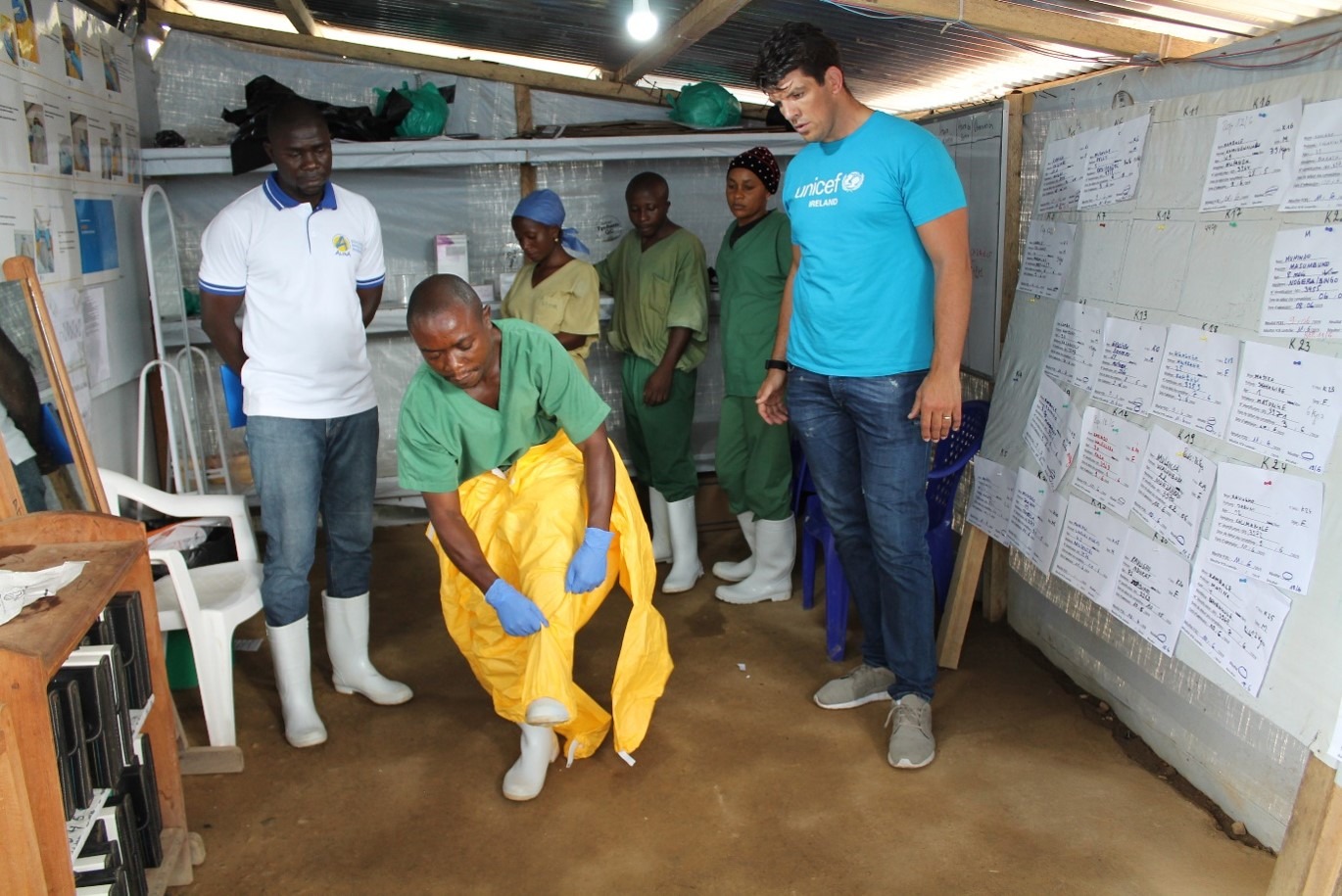 We met the doctors who look after the children and adults in the centre. They wear three layers of protective suits.

And each suit is destroyed after it’s been used just once. The suits are very hot and doctors can only stay in them for a very limited amount of time 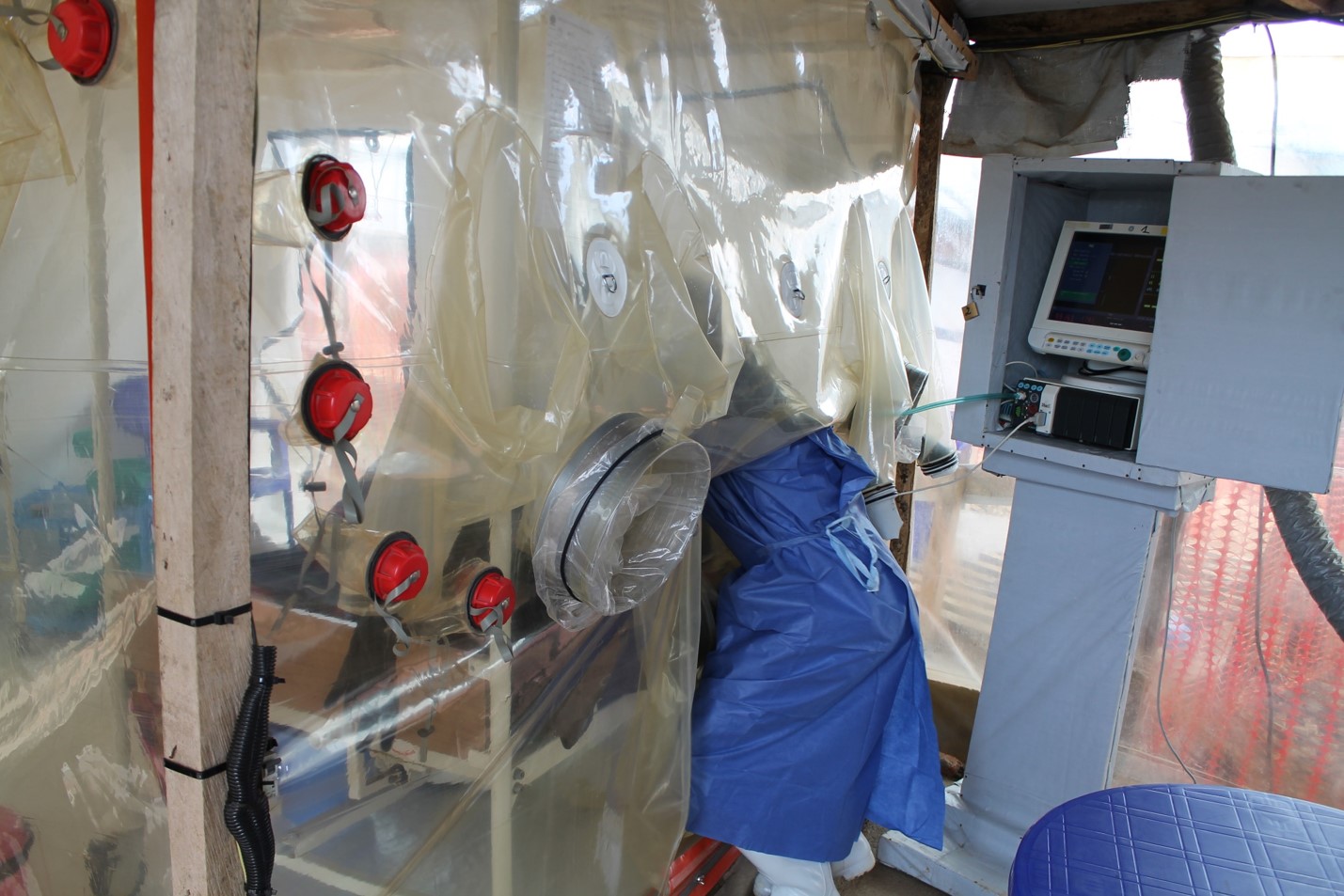 The doctors can also care for the patients from outside the plastic cubes.

It’s amazing to see the extent that medical staff go to, in order to limit the risk the disease spreading even further. 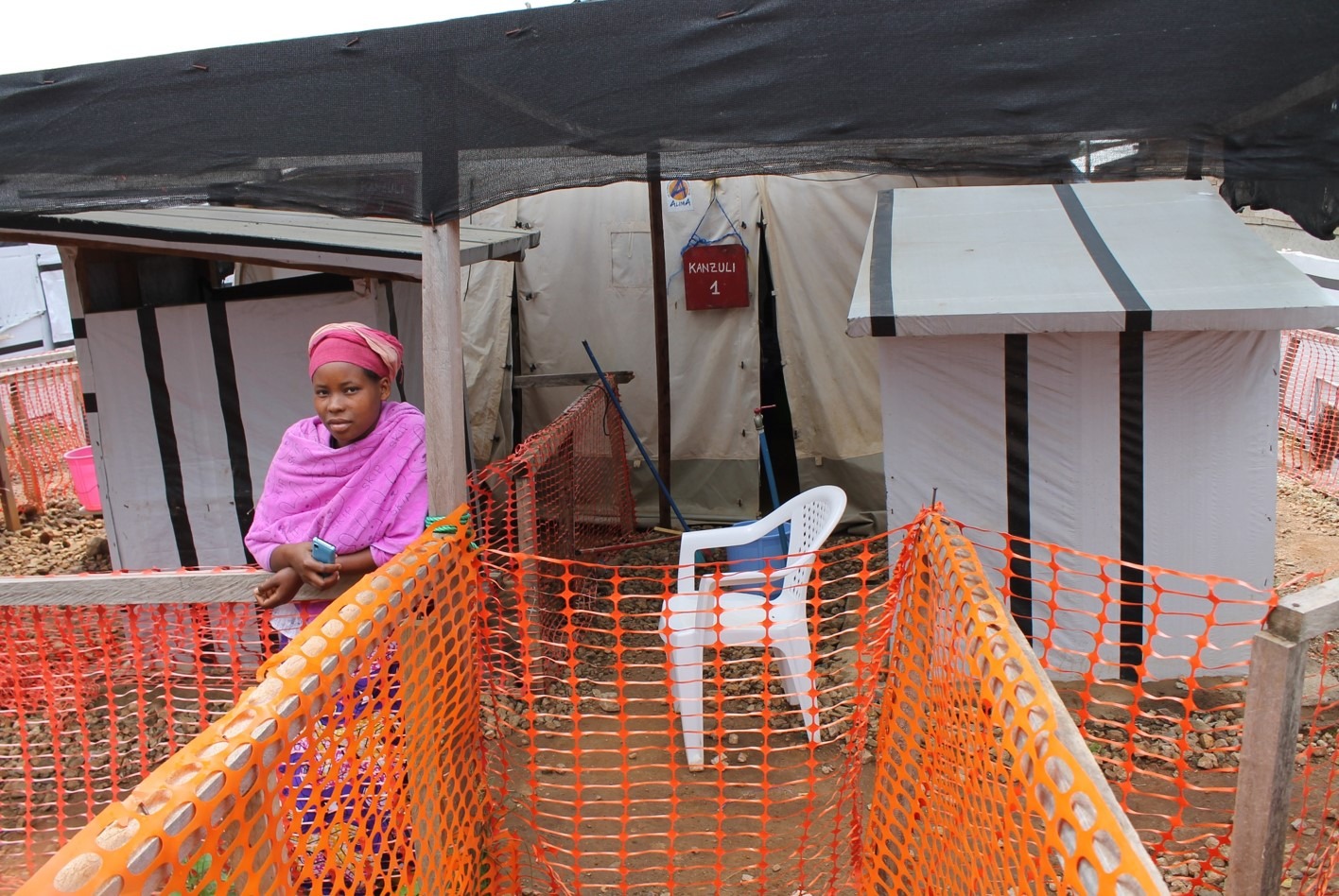 At the centre, they also care for people who are suspected of being infected with Ebola. We met 22-year-old Abigael who was anxiously waiting to hear the result of her tests.

They are each assigned a small space, fenced off from the rest of the centre and given their food down a wooden shoot. You could just feel how horrible it was for them to be in this kind of limbo. 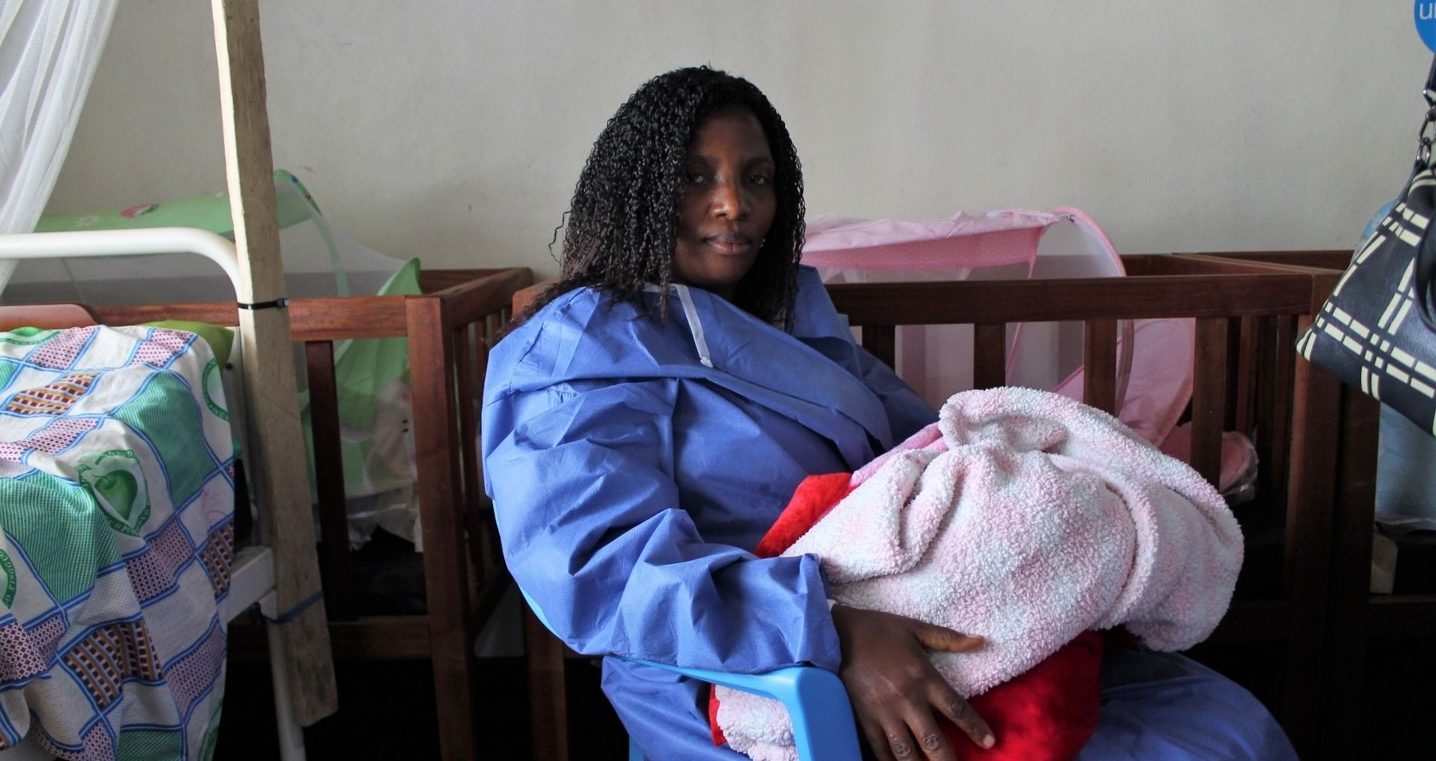 Many of the adults with Ebola have young children and UNICEF supports a specialized crèche beside the centre.

This is an amazing place. Many of the children are themselves potentially infected with Ebola but some of those we met were as young as 11 days old.

They need constant attention and like every child, they need physical contact to feel secure and stay healthy. The only people who can provide this intimacy are Ebola survivors, like Florida, who are now immune from the disease. This incredible group of women care for the children. Giving them all the love and attention that they so badly need, until they get the all-clear and can go home with their family 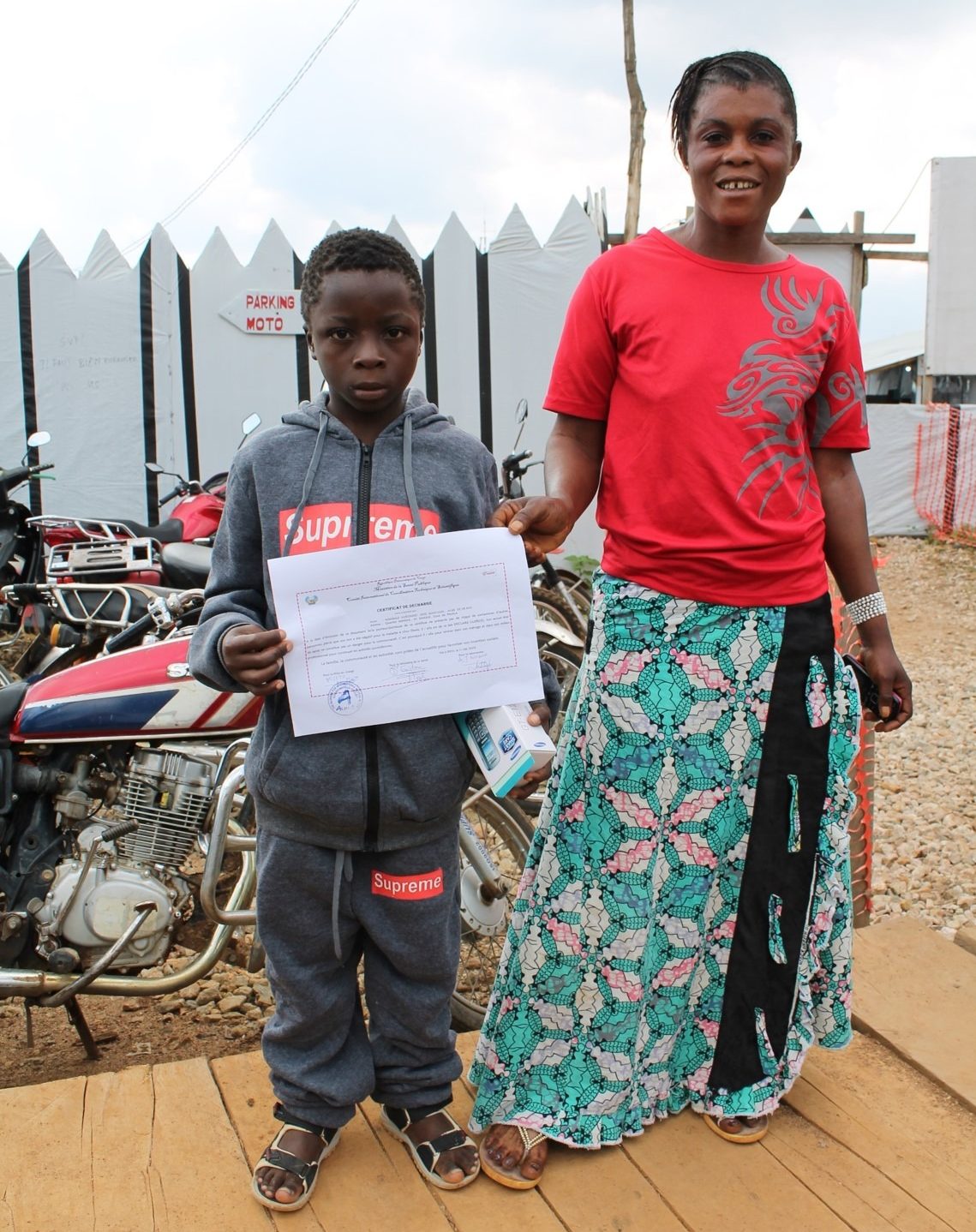 There we also some really wonderful stories at the centre. This is Prince. He is 8. And he has just recovered from Ebola. We met him and his mum Mado as he was leaving the centre.

You could tell just how much Prince had been through and how much he needed to return to his normal life, but it meant a lot to everyone to be able to see him start his journey. 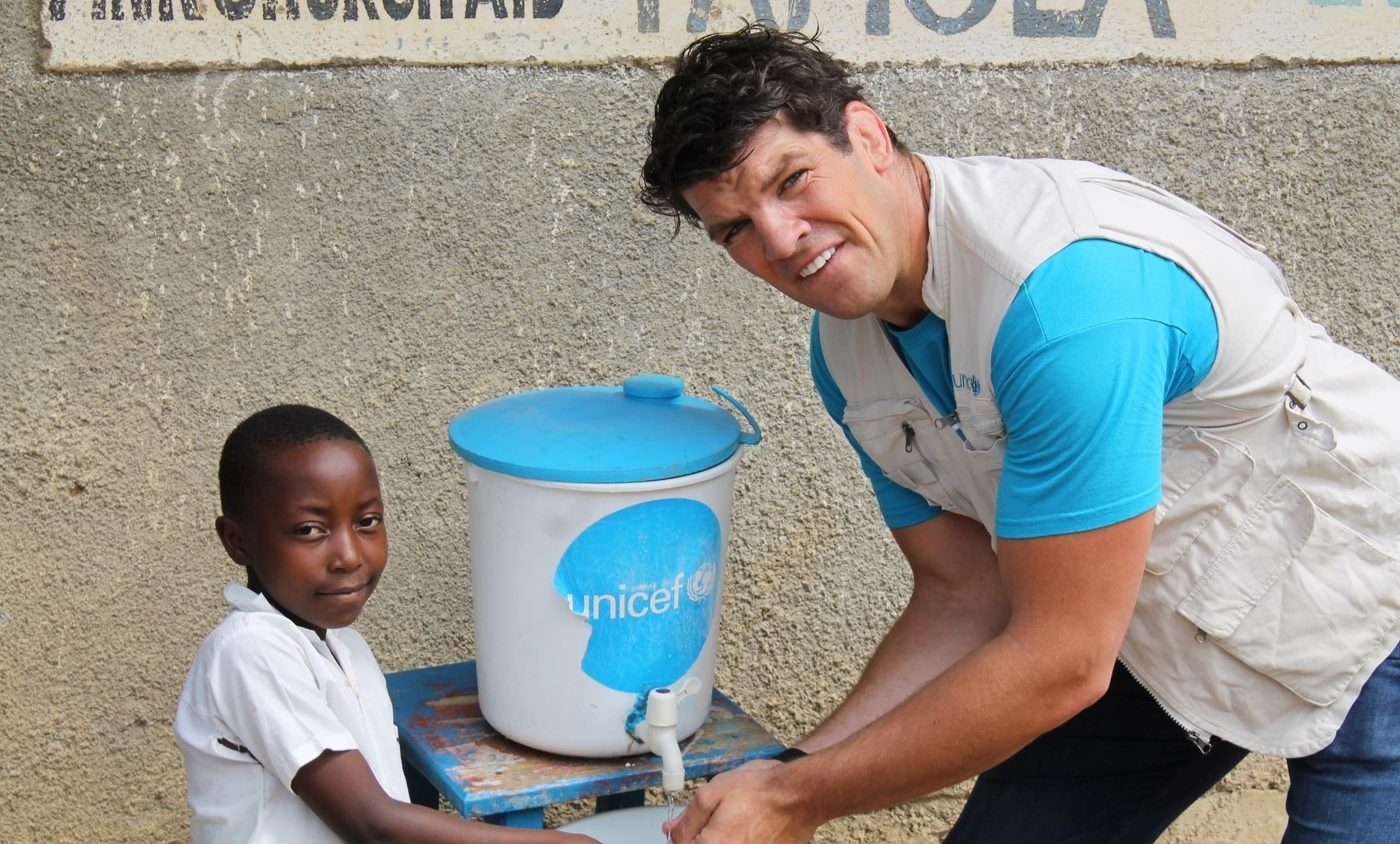 The day after visiting the centre we visited a nearby school, so we could better understand the scale of the prevention being done in local communities.

Here UNICEF teams are supplying water and hand-washing facilities to help protect children. I met little Malonga (8) who showed me how she regularly washes her hands. She also learns how she and her family can take practical steps that will help stop Ebola in its track. 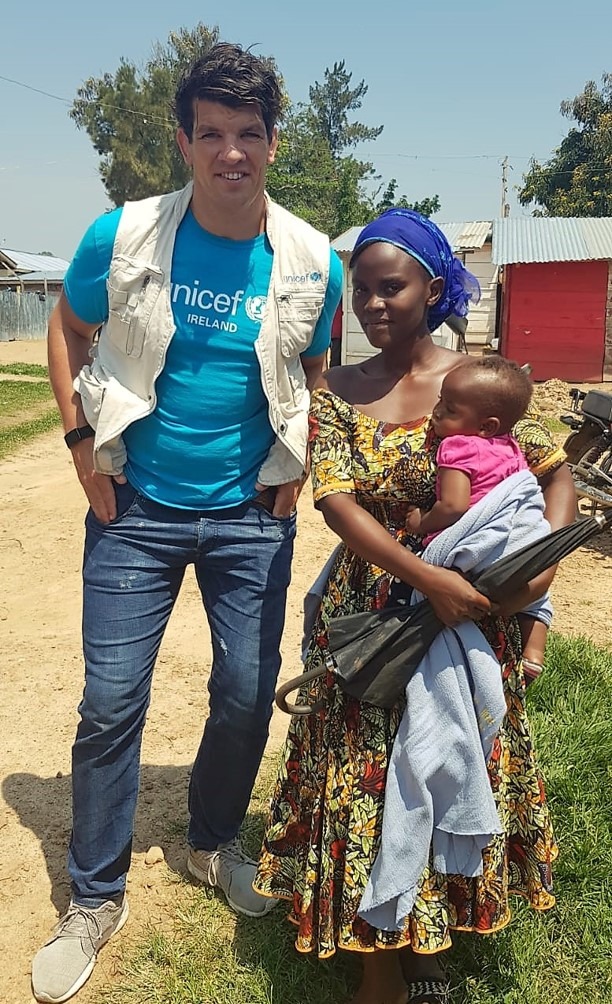 In the DRC, one of the big challenges to stopping Ebola are the myths and misconceptions that have spread in some local communities.

This can mean many people are resistant to treatment and vaccinations and in extreme cases, even hostile to health workers. On the street in Beni, we met Misaka, a young mother.

Misaka admitted that she hadn’t believed that Ebola was real, until three people she knew got infected, with two tragically dying from the disease. 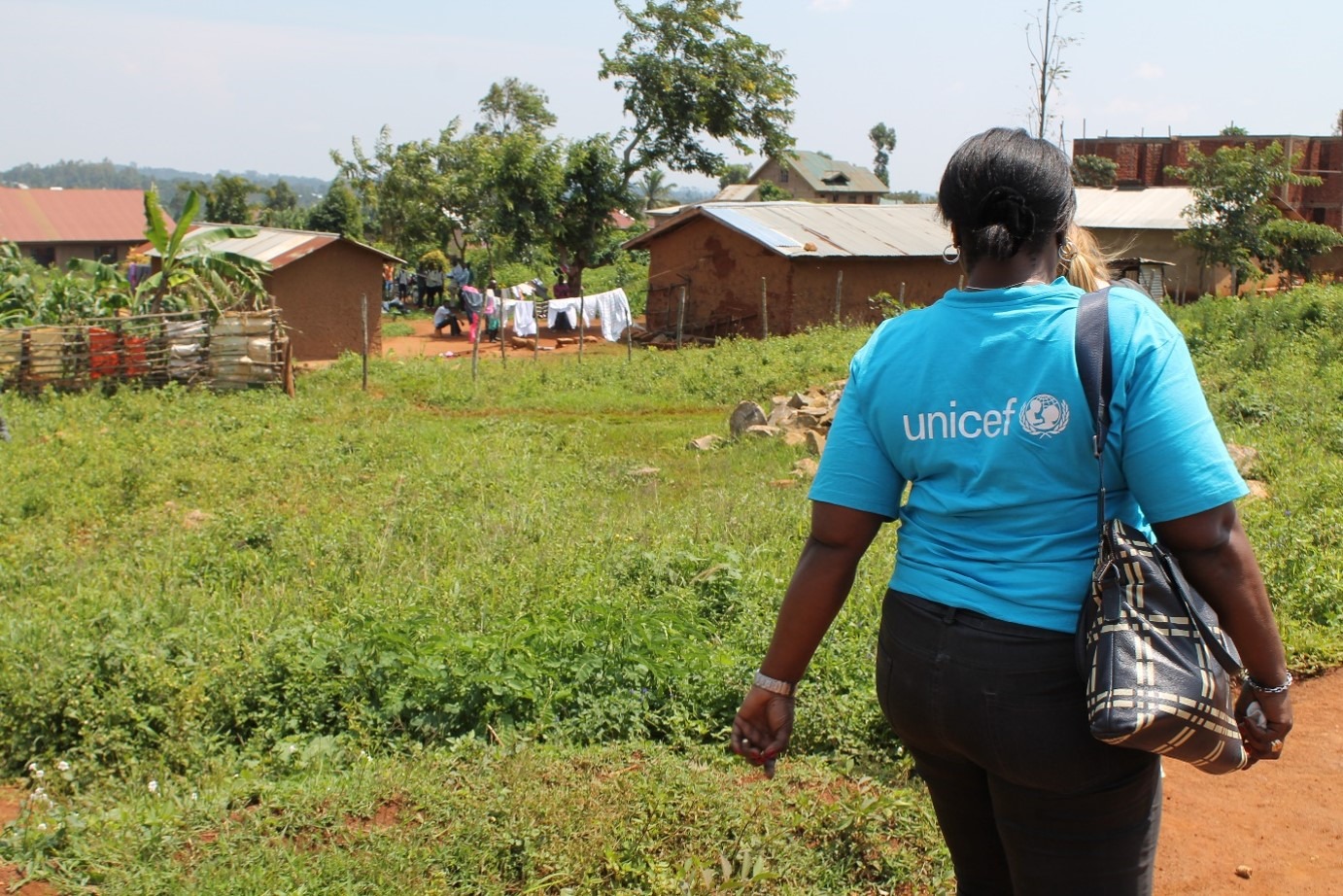 We visited one of these communities in the heart of Beni. Only the day before a local Pastor had been diagnosed with Ebola. He had been resistant to accepting support from health workers in recent times and had been sceptical about the disease.

We visited his house with decontamination crews and UNICEF-supported outreach workers who spoke to the local community about how they can help limit the spread of the disease. 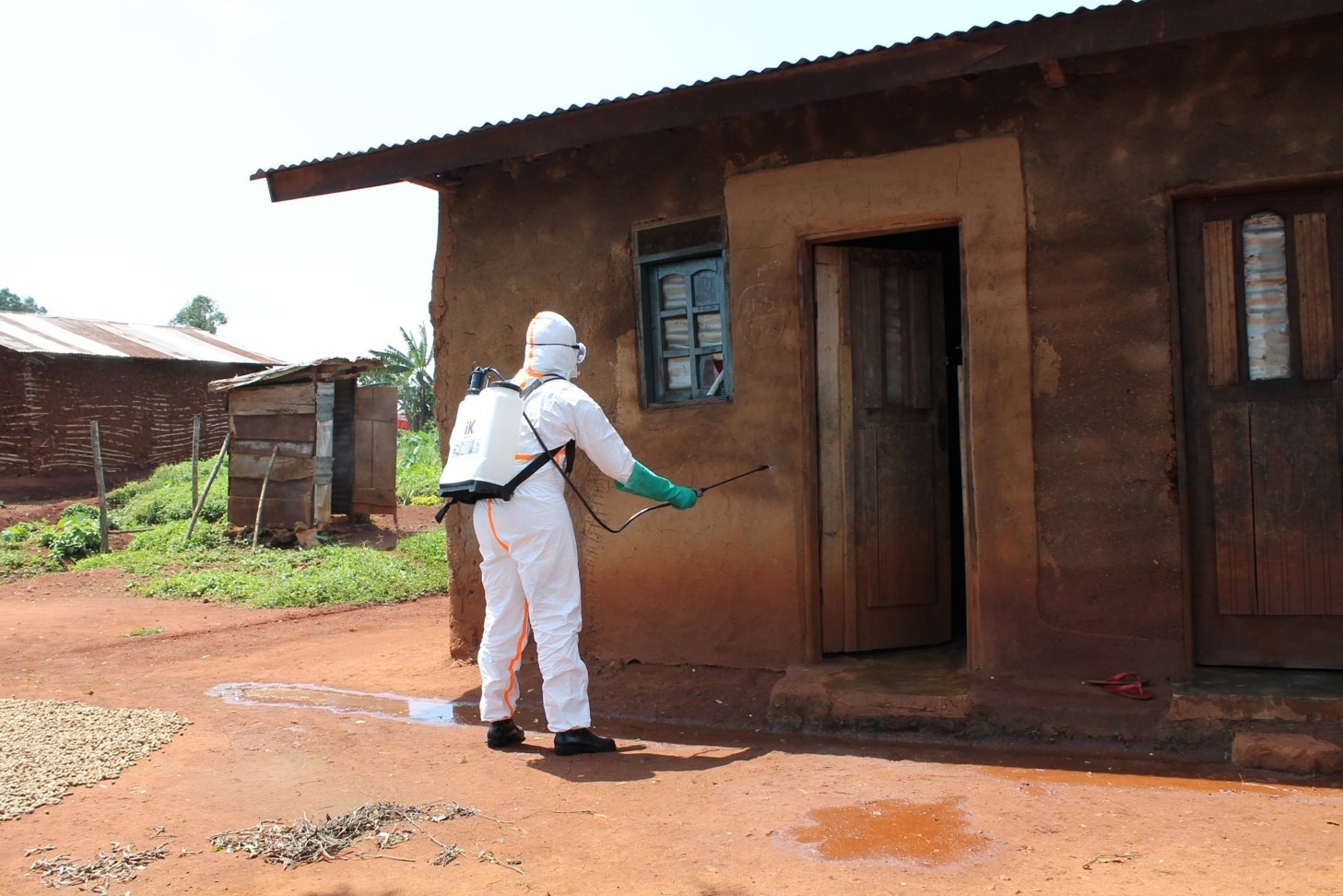 The Pastor’s house in Beni was hosed down with disinfectant. Inside and out.

To protect his wife and landlord who remained in the house after he had been taken to the Ebola Treatment Centre. 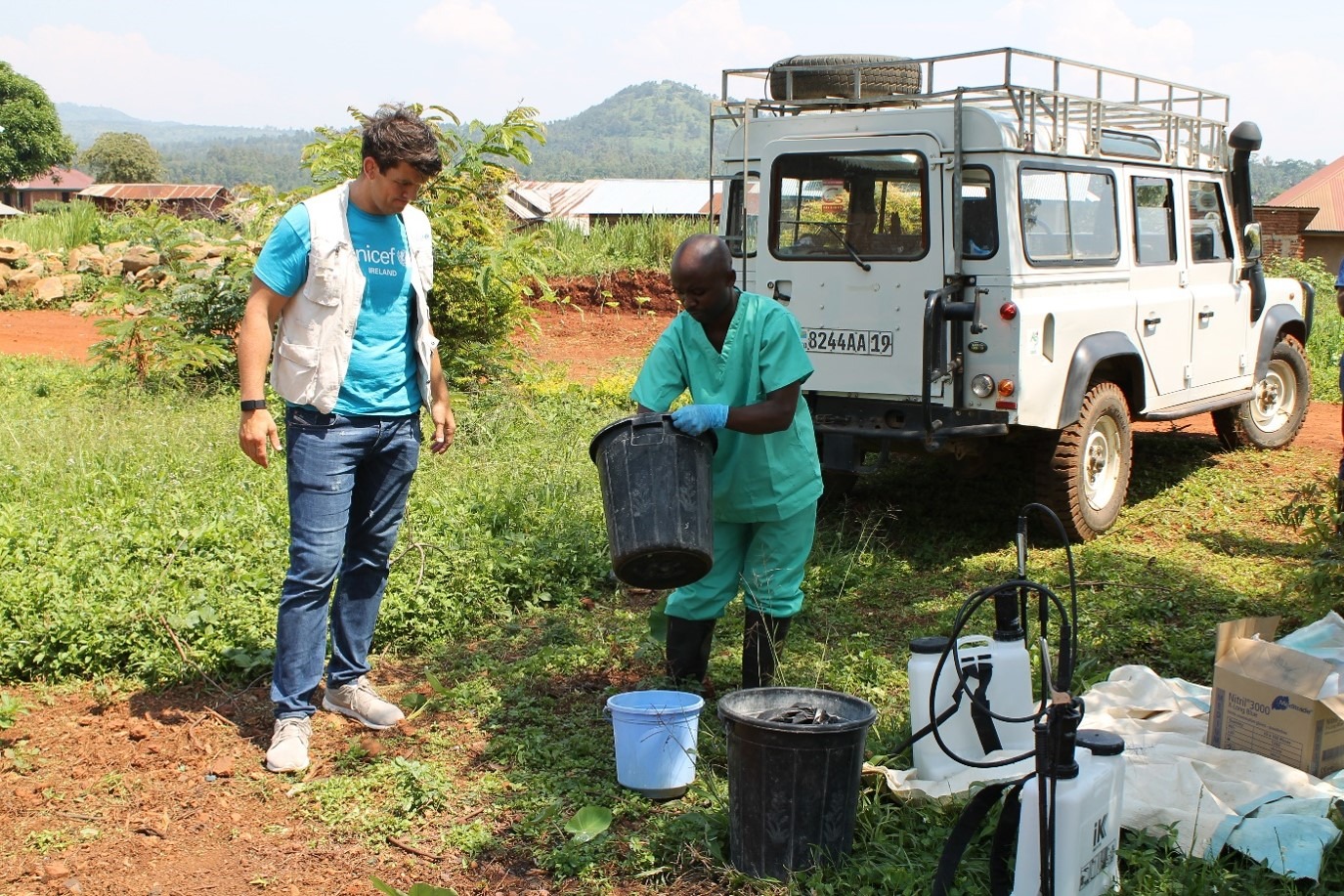 It was amazing to see lengths the teams went to as they tried to ensure that Ebola wouldn’t spread further into the local community.

Everything was disinfected and sprayed after use. While Ebola is mostly transmitted through person to person contact, it can spread on clothing and other surfaces, so the team were absolutely meticulous. Making sure that nothing was left to chance. 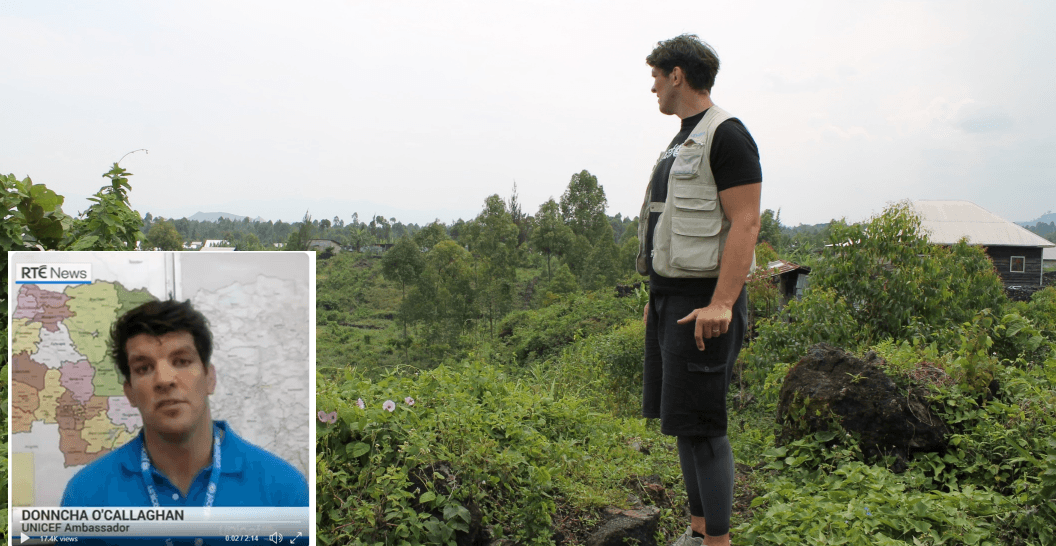 In the end, we were in the DRC for five days. I have been on a number of overseas trips with UNICEF but nothing quite like this.

On day 3, I did a Skype interview with RTE news and did my best to try and get across what we were seeing – but it wasn’t easy. The children I met and the lives they live will stay with me for a long time. And even though I’ve now been home for a few weeks, I still feel like I’m trying to properly process what I saw.

UNICEF’s work is often in some of the toughest places on earth and parts of the DRC fit that description. But amidst all the issues there and the difficulties children face, their resilience and strength shines through. It’s pretty incredible.

Personally, the visit was a massive reminder to me of just how lucky I’ve been. And that I need to do everything I can to support them. 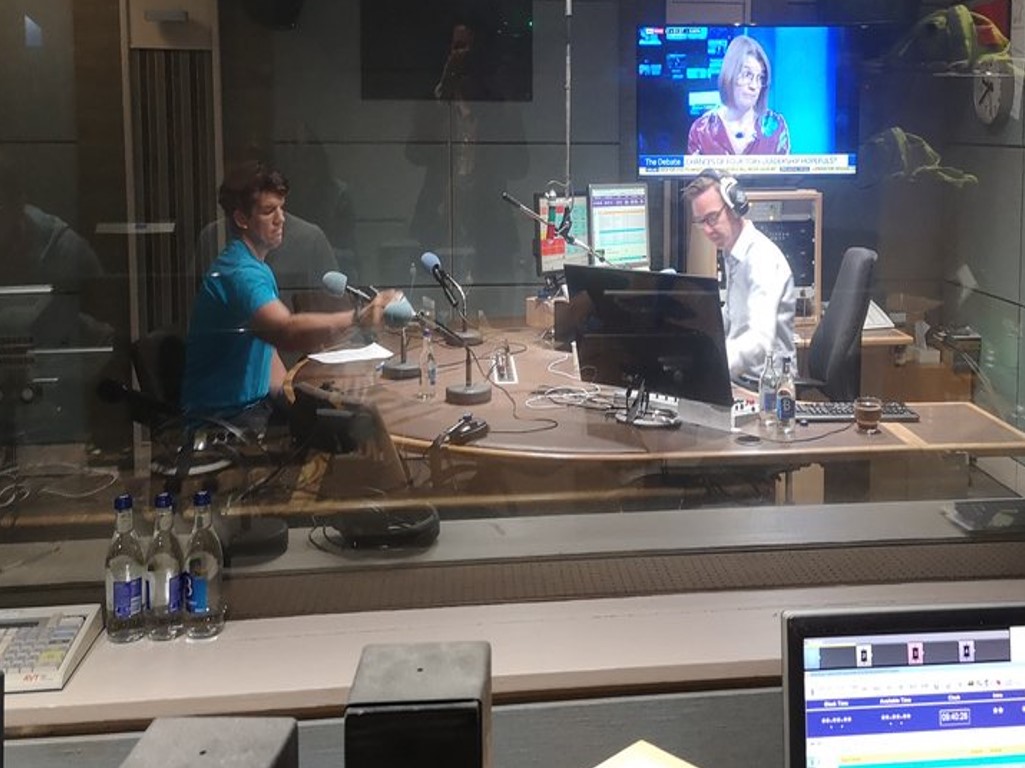 Since I’ve been home in Ireland, I’ve been trying to highlight the stories of the children I met and the difficulties they face every day.

I always feel our history in Ireland helps us empathise with people in other nations that are now going through tough times. Maybe it’s because we have suffered. We’ve been through famine and we’ve been through wars too. We know that children and families need support at these moments to rebuild their communities and create a much more positive future. This is exactly what I wish for the amazing people I met in the DRC.

If you’re interested in learning more about the issues faced by children in the DRC go here.