He is aiming to raise a million for Yemen

Dublin- October 2020: It all comes from one talented individual. Mick has pledged to raise a million for Yemen. 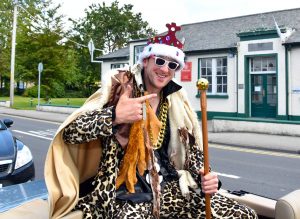 Ireland’s very own West Coast rapper, Mick D is a master lyricist with a natural talent for song writing. He has produced many tracks since his 2016 debut ‘I love Mayo’ landed him on TV3. He has collaborated and co produced with Dennis McCalmont on several tracks including ‘I Love my Tea‘, ‘Misunderspud‘, and the hot single ‘The Na Song released in the summer of 2020. Always up for new exciting musical projects, Mick D wants to push boundaries with every new project.  But now he is diverting his time to Yemen, a country that needs us. Just recently, he has kickstarted his ‘Euros for Yemen’ campaign to raise €1 million euro for Unicef Ireland’s work in Yemen.  We asked him some questions recently to get some more info.

Q: Hi Mick, Thank you very much for your great initiative “Euros for Yemen” launched on October 7,2020. How did you get the idea to launch this event?

Mick: It came to me in a dream, kinda like St Patrick. 🙂 Ah no, I have always wanted to do something for another country in need and now after my Dad passing away, it has taken on more significance because my Dad was a very kind man. Growing up in the ghetto in Ballina in the 90s, I learned that making ends meat was not always easy. I am the middle child of 13 kids and when we were young,  Dad would chop up a Mars bar into tiny bits to feed us all a treat on a Friday night. Nowadays, we have too much so Mick D is like a preacher giving peeps the chance to repent for their sins.

Q: What is your goal with this event?

Mick: Look, I know €1 million euro seems like a ridiculous target and part of me is wondering what have I got myself in for but I am going to give it my best shot. The goal is to get as many people working with me to try and reach as many family members and friends and kind humans across the globe as we can before January 5th and see where it takes us. We have had a few people come forward to offer their services with the fundraiser which is so heartwarming at this early stage. To quote my good buddy Kanye West ,  ‘Shoot for the stars, so if you fall, you land on a cloud! ” Love it.

Q: What is happening right now in Yemen?

Mick: Yemen quite simply is in a mess right now. Ongoing conflict, a crumbling health system, Covid-19 pandemic and 2 million children suffering from acute malnutrition make it a country that demands our attention and help. On top of this, UNICEF states that ‘Yemen is one of the world’s most water-scarce countries and over 18 million people urgently need water, sanitation and hygiene (WASH) assistance.’. As Ireland’s only West Coast Rapper, I am calling on the millions of followers I have across the world to get behind this campaign and DONATE. Unlike many of my gangsta G’s across the world, Mick D is a lover not a hater. I would rather spend my money on Yemen than gold ropes and fast cars. One World. One Family.

Q: How do you think people can help?

Mick: I am very much aware of the wonderful fundraisers out there so I am asking for small donations and for each donor to tag another. As I said in a recent video, no matter how bad our problems are, they can never be compared to the problems and constant insecurities that people face daily over in Yemen. You can help by donating on this page…All we ask for is the minimum of donations and to tag a friend.

Mick:  I picked Facebook fundraiser platform as it doesn’t ask the donor for a fee. I like that! Minimal fuss for the donor is what I want and Facebook provides this. There is no commission beng asked for by Facebook. either. I just want the donation experience to be quick and easy for potential donors because that’s how I would like it. It was originally intended to be a ‘Euro for Yemen’ campaign but FB require a minimal donation amount of €4 so I hope people can understand this.

Q: One last word for us?

Mick: People are laughing at me when they see the target I have set. I have had several people message me saying : King Mick, are you sure you should be going for €1 million euro? or ‘Sure even if you raise half, you’ll be doing well.’ And I would start to doubt myself but then I would check the fundraiser status and see the new donations and I am encouraged and full of hope.  I know with the help of others, we can build an army of people who can share this fundraiser to the world. One world. One Family.

Thank you so much Mick for fundraising for our appeal in Yemen. The funds will be used to provide nutrition services and healthcare services to the most vulnerable children. If you also wish to fundraise for UNICEF’s Ireland, please drop an email to Claire at claire@unicef.ie.