The latest UNICEF report on childhood in rich countries – Worlds of Influence – puts Ireland in 26th place out of 38 OECD/EU countries for adolescent mental well-being. Yet thanks to better scores on physical health (17th), and academic and social skills (6th), Ireland sits in the top third of the league table overall (12th).

Fewer than three-quarters of Irish 15-year-olds (72%) rated their life satisfaction with a score of 6 or more on the 11-step “Cantril Ladder” scale in 2018. This is one of the lowest rates in the OECD/EU, where it varies from 53% in Turkey to 90% in the Netherlands. This data come from the latest Programme for International Student Assessment (PISA) study, but the results are in line with another school-based survey carried out the same year. It found that Irish 15-year-olds had the lowest average life satisfaction score across 45 European countries, above only Malta. More than six in 100,000 Irish adolescents aged 15-19 commit suicide, around the average for this group of countries.

How children feel about their bodies is tied up with their overall well-being. Over a quarter (27%) of Irish 11-15-year-olds said they were too fat and 14% said they were too thin. Body image explains 10% of the differences in life satisfaction among boys, the highest proportion in this group of 35 countries, and 16% among girls, the fourth highest.

Why do some children in the same country have higher mental well-being than others? Worlds of Influence highlights the importance of children’s relationships with family, with peers and at school. 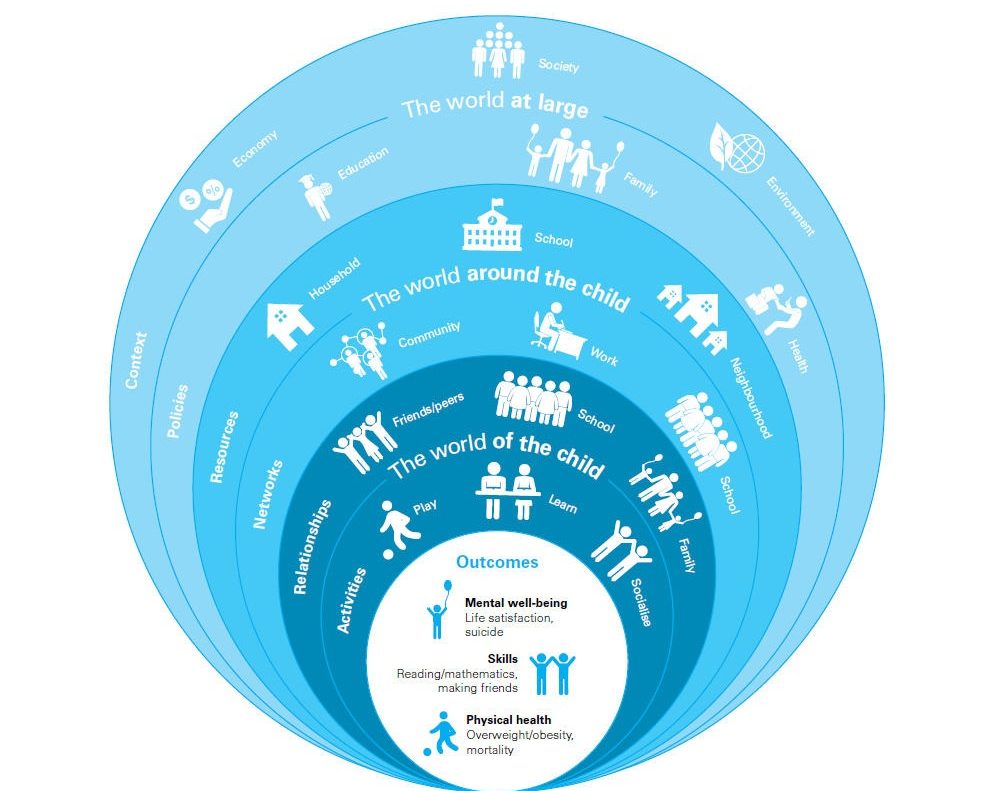 Supportive families help children thrive. In Ireland, just over half (53%) of 11-15-year-olds with low family support report high emotional well-being, compared with three-quarters (74%) of their peers with high family support. Emotional well-being is based on four questions about the frequency of children feeling low; feeling irritable or in a bad temper; feeling nervous; and having difficulty sleeping.

Being bullied hurts children in the present and has lifelong negative consequences. Just over half (56%) of Irish 15-year-olds who report being bullied frequently have high life satisfaction, compared with more than three-quarters (76%) of their peers who do not. This is the third largest gap in life satisfaction across 33 countries for which data is available, after the United States and the United Kingdom.

Worlds of Influence investigates the impact on a child’s well-being of all the environments the child interacts with.

School is such an important part of children’s lives that it is not surprising that a sense of school belonging is related to mental well-being.  “Just over half (53%) of Irish 15-year-olds who have a low sense of school belonging report high life satisfaction, compared with 81% of their peers with a strong sense of belonging at school. This is the largest gap in life satisfaction across 31 countries in the comparison.”

Worlds of Influence produces a pre-pandemic ‘baseline’ of childhood in rich countries. Although children are the least likely to develop a severe form of the disease itself, the COVID-19 crisis poses a long-term threat to their well-being. Government policy needs to prioritise the needs of children and young people both during the pandemic and in its aftermath.

Yekaterina Chzhen is a co-author of the newly released UNICEF report Worlds of Influence: Understanding What Shapes Child Well-Being in Rich Countries, which was launched in Ireland by the Minister for Children, Roderic O’Gorman.