As we mark 30 years of the Convention on the Rights of the Child UNICEF Ireland Executive Director Peter Power reflects on the progress made, and the challenges remaining. 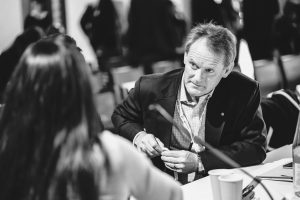 Thirty years ago world leaders made an historic commitment to the world’s children by adopting the United Nations Convention on the Rights of the Child (UNCRC) – an international agreement on childhood.

Since then, the UNCRC has become the most widely ratified human rights treaty in history and it has transformed children’s lives around the world.

UNICEF, as the United Nations organisation mandated to protect the rights of every child, translates the Convention into its everyday work for children.

In the 30 years since its adoption, the Convention has exerted a deep influence on political, public and private life in the 195 signatory countries. It has been a catalyst for transformative change in the lives of children everywhere. UNICEF is proud of the role we have played in bringing about positive change, but we recognise that more remains to be done before we can truly say that children’s rights everywhere are fully realised.

In 2019, the Government made a Global pledge at the United Nations General Assembly in New York recommitting to achieving every right for every child. The 30th anniversary of the Convention provides an opportune time for us to reflect on the progress made on children’s rights, and the steps we need to take as a nation to move children’s rights further forward. 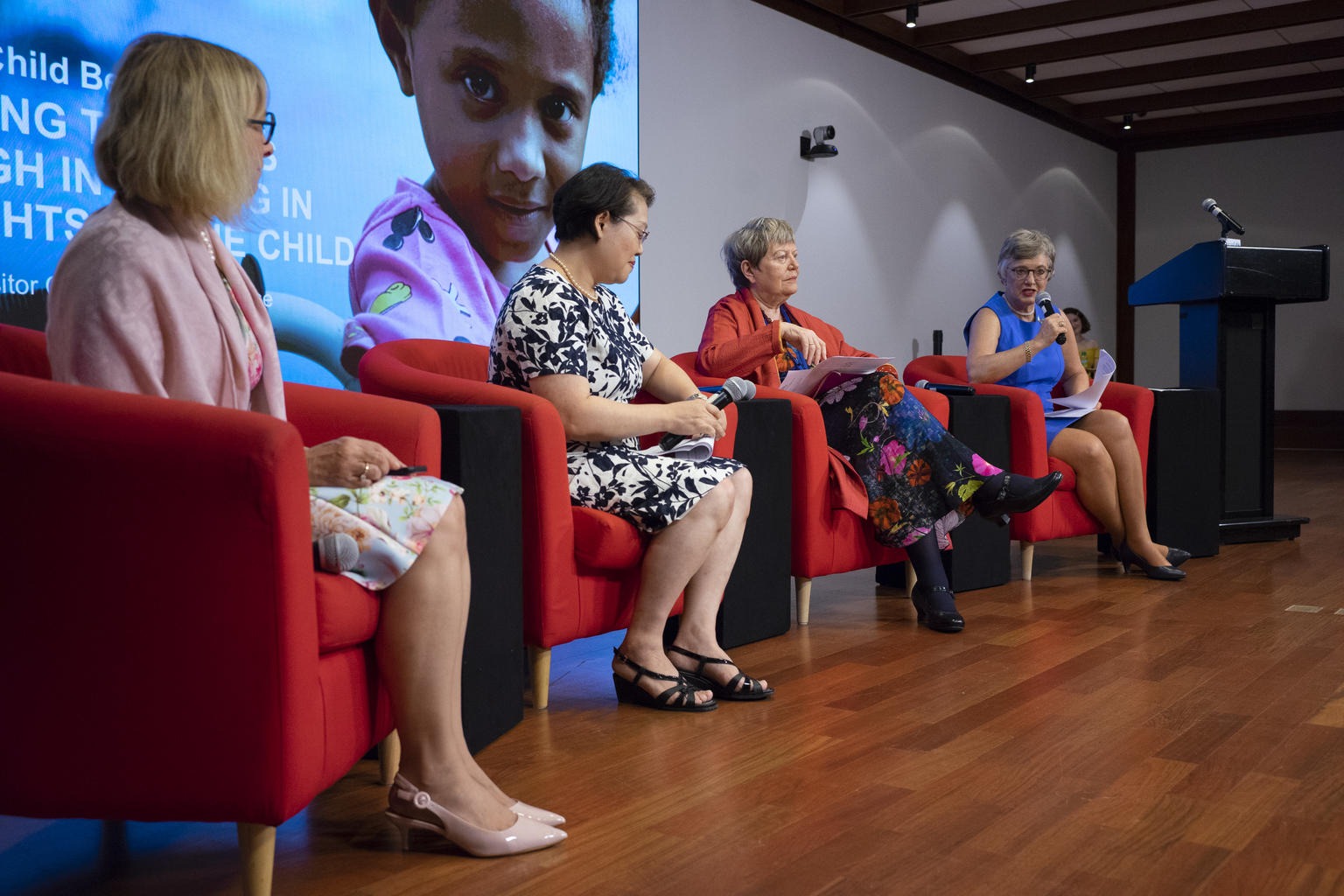 Photo: On 15 July 2019 at UNICEF House in New York, Minister for Children and Youth Affairs Katherine Zappone, speaks at the panel discussion at the event ‘Leave No Child Behind: Achieving the SDGs through investing in the rights of the child’.

States are subject to periodic review by the UN’s Committee on the Rights of the Child. Ireland was last reviewed in 2016. Under Article 45 of the Convention, UNICEF has a special mandate to assist signatory countries in ensuring the effective implementation of the Convention by providing expert advice and best international practice. UNICEF Ireland supported children and young people to submit a report to the Committee. The issues they raised included education, the climate crisis, mental health, Direct Provision, and religion in school.

You can read the Committee’s concluding observations here.

In 2021, Ireland will return to the Committee on the Rights of the Child for its next review.

Since Ireland ratified the Convention 25 years ago, successive governments have enacted laws and policies to invest in making children safer, healthier and better enabled to participate in Irish society.

Right to be heard

In Ireland, the child’s right to participate has been recognised and enabled at the highest levels – we do well in this regard. For three years now the Taoiseach has facilitated a #KidsTakeOver of his office for World Children’s Day. This is a symbolic yet tangible expression of the right of every child to be heard at the highest levels of government in relation to issues which impact directly on them.

However, as we all know, children’s rights are still violated every day and we have not achieved full rights for children.

Despite our relative wealth as a nation, and notwithstanding having one of the fastest growing economies in Europe, Irish children face child rights’ violations due to poverty, homelessness, violence and marginalisation. Some lack access to basic healthcare, services and nutrition.

The anniversary of the Convention provides an opportunity to not just reflect on the progress made, but also to identify the issues that will take priority over the next 30 years as the very nature of childhood in the 21st century continues to change rapidly.

Our climate is changing beyond recognition. Without a fundamental change in direction climate change will be irreversible, bringing catastrophic impacts for the planet and humanity well before the Convention reaches its 60th anniversary. Nobody could have predicted how children would become such an incredibly powerful force for change over the past 12 months. The Convention on the Rights of the Child explicitly confers on children the right to be heard on issues that affect them. I know the committee will agree that the last 12 months has seen children exercise that voice in an unprecedented way. They must be heard and action must be taken.

Last September, 16 children from around the world instituted legal proceedings at a New York court against Argentina, Brazil, France, Germany and Turkey, using the Convention to argue that Member States’ have violated their rights by failing to tackle the climate crisis.

Is Ireland addressing climate change as a fundamental threat to children’s rights?

Photo: On 2 May 2019, (centre) Rukaiya Abbas, a UNICEF Nigeria Education Officer, sits with (left) Promise, 7, and Sintiki, 5, at Kulmsulum School in Maiduguri, the capital of Borno state in northeast Nigeria. “I get motivated when I see children go to school,” says Rukaiya. “I come from Maiduguri and I’m convinced that with more children in school we can have a more stable and peaceful future”. As of June 2019, more than 1.9 million children had been forced out of school due to an increase in violence and insecurity across West and Central Africa due to violence and insecurity.

Globally more families are migrating than ever before, due to sustained conflict, economic hardship and the climate crisis. The UN projects there will be 200 million climate refugees by 2050. That is a ten-fold increase.

How will Ireland respond to the growing needs of children on the move?

Children are growing up in a digital world. This new world provides unique opportunities to realise the rights of hundreds of millions of children. Equally, this new digital world has the capacity to inflict severe psychological and emotional and societal damage on children on an unimaginable scale. How we address this opportunity and this threat may well define the rights of children for the next 50 years.

Progress towards achieving children’s rights has been slowest for children from the poorest households. As inequality deepens further it threatens to destabilise society and political institutions, endangering children.

Is enough being done in Ireland, and globally, to address these new threats.

This is by no means an exhaustive list of the risks that children face.

Worldwide, their survival, safety and well-being is also threatened. The slowdown in immunisation coverage rates threatens to reverse hard-won gains in children’s health, with a global resurgence of measles this year. Meanwhile, UNICEF’s recent State of the World’s Children report states that at least 1 in 3 children under five is either undernourished or overweight.  And half of students aged 13 to 15 worldwide report having experienced peer-to-peer violence in and around school, including bullying.

Much more needs to be achieved to fully realise children’s rights.

The Sustainable Development Goals (SDGS) provide a global framework for governments to tackle these issues. The Convention and SDGs, when implemented and achieved, both translate to progress for all people, including the youngest citizens of the world. If Ireland is to achieve the Goals by 2030, as agreed, progress must be made through the lens of children’s rights, and it must happen rapidly.

Although today’s children face new threats to their rights, they also have new opportunities to realise their rights. We have to recapture the hope, vision and commitment to action that led to the adoption of the convention in 1989. In 2019 we must look ahead to the future of childhood and commit to urgent, concrete action to protect and promote the rights of every child, now, and in future generations.

We must work to ensure that the Convention remains a living document and becomes guiding light for every country, community and family.

When UNICEF Ireland brought young people from Ireland to contribute to the work of the Committee on the Rights of the Child in 2016 we listened to what they said they were most concerned about. They told the Committee: “We worry about our futures and what that future will look like. Are we learning the skills (we need) and will our world be safe?”