Being there for children in Lebanon – UNICEF Ambassador Cathy Kelly 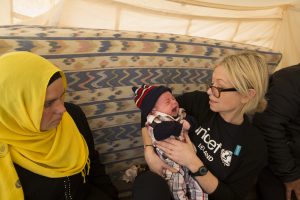 The news reports speed by as I watch: small children, their little faces injured from the flying glass. Tiny heads bandaged, and bulging dressings around ears, because fragile eardrums have been agonisingly blown out.

Whatever the injury, their eyes all look the same. Fearful, terrified, staring into a world that’s changed forever.

I don’t know these children, don’t know their favourite cartoon character, if they like strawberry ice cream or prefer pistachio, if they still sleep with a special teddy or not. But I know that their lives have been radically altered since the cataclysmic explosion in Beirut on August 4. Some 300,000 people have been made homeless, a quarter of them children, like the sad-eyed little ones on the news.

The streets are covered with broken glass and some of these children have not been reunited with their families. And perhaps that’s because their families are dead.

Once you have a child to watch over, you can never see the TV news or read the newspapers the same way again. Every injured child makes you reach out a hand to your own darling children — as if touching them will keep them safe.

At around 6pm Beirut time on that fateful day, just over two weeks ago, 2,750 tonnes of unsafely stored ammonium nitrate exploded in the city’s port. The blasts generated seismic waves equivalent to a 3.3-magnitude earthquake. The explosions were felt some 240km away in Cyprus.

A huge pinkish mushroom cloud went up over the city — and I cannot imagine the fear felt by anyone staring up at it, thinking the worst.

The shockwaves destroyed buildings, turned cars over as if by a giant hand, blew out windows and knocked people onto the ground, where they were injured by debris. The blast zone extends more than six miles from the port.

UN figures described the explosion as being “like 15 years of war in 15 seconds”. Thousands were injured, and hundreds of thousands were made homeless.

I’m at my desk in still-sunny Wicklow, looking at news reports of the injured in Beirut, and my heart breaks for them and for their parents. It may take a lifetime of help to remove the fear and terror in their eyes. They’ll need help to take away their nightmares. How can any parent look at those little boys and girls and begin to imagine where to start to ease their pain? My sons are teenagers now, miles taller than I am, and yet the need to comfort any small child is still strong, as it is with most parents.

Many of the injured are among the 1.5 million Syrian refugees living in Lebanon. This small, impoverished country of just six million people hosts the highest number of Syrian refugees in the world.

On one report, a mother says her daughter won’t talk about what happened and that she wishes it had happened to her instead. That’s something I’ve often been told in my 15 years as a Unicef ambassador.

I’ve sat with women in malaria units where the children lie two to a bed and watched them numbly say they’d take the illness themselves, anything to save their child.

I sat with a woman, who was probably not yet 30, her small girl on her lap, waiting for the results of the blood tests that would tell if the little girl had picked up HIV when she was being born, because the mother was HIV-positive. The mother sat utterly silent in her fear. No interpreter was needed to tell that she wished her child was left unharmed.

These brave women have never left me. I can see them if I close my eyes. Because they are like many of us: parents.

In recent months, Lebanon had already been a country on the brink. The economic system went into freefall in late 2019. Its currency lost 90pc of its value. Even before the blast, nearly half of all Lebanese people were living in poverty.

These wonderful people had given refuge to more people fleeing the ravages of the Syrian war than any other country on the planet. And then two disasters hit Lebanon, a country which has already seen so much devastation.

Warzones and disaster zones require cool but high-speed planning. As soon as the blast happened, UNICEF and other organisations were assessing the needs of the people. They have been delivering medical care, safe drinking water, shelter, food, and vaccines against diseases like tetanus, and efforts to reunite children with relatives are still ongoing. UNICEF now has a huge 200-person team on the ground

At least 1,000 children are wounded. Some still have no shelter. No medicine. The three big hospitals in the area are destroyed, including one neonatal clinic supported by UNICEF.

UNICEF supports the neonatal unit, which provides medical interventions for newborn babies. © UNICEF/ChoufanyMeanwhile, Covid-19 is roaring through the city. Many much-needed ventilators are in smithereens and the medical capacity of the city is at below 50pc as healthcare workers desperately try to help the wounded.

Children caught up in the explosion will not just be facing medical issues: the psychological shock of such a trauma can be felt for a lifetime. I’ve seen the remarkable work UNICEF psychologists do with kids in Jordan’s Za’atari refugee camp. Ripped from their homeland after a brutal war and living in the limbo of camp — never knowing if they can return to their beloved Syria — these children and teenagers have seen brutality and sights no child should have to see.

It takes years of help to deal with this pain. Now Lebanese children and Syrian refugees in Beirut have been at the epicentre of yet more destruction and fear.

UNICEF has set up a tent in downtown Beirut to provide psychosocial support to help children coping with trauma and bereavement, many of whom were separated from their families in the chaos and destruction of the blast. Little ones who couldn’t tell rescuers who they were because they couldn’t yet speak or were too traumatised to talk. I can’t bear to think of any child in that situation. 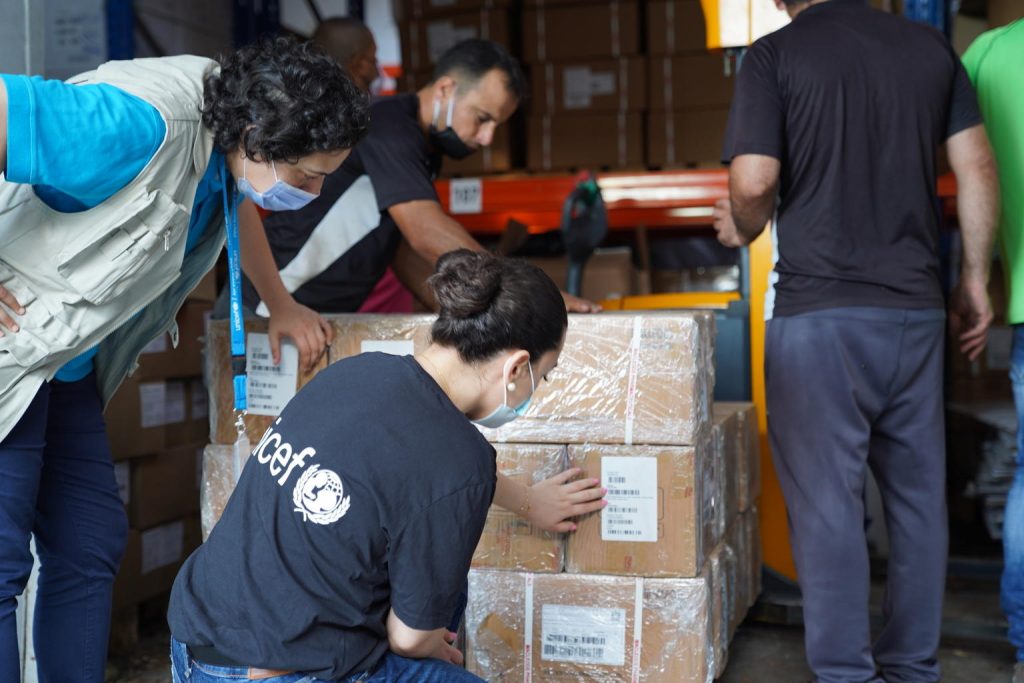 Because Covid-19 has already pushed the limited Beirut medical system to the edge, the destruction of those three hospitals has made the situation much worse. We must keep help coming. The food situation is critical too because 90pc of Lebanese food imports came through the port, which has been destroyed. The country’s main grain silo was wiped out in the blast. There are real doubts about how this country is going to feed itself.

We need the international community and people from around the world to stand in solidarity with the children of Lebanon and help bring some degree of normality back into the lives of the people of Beirut — because they are just like us: people trying to do their best for their beloved families.

This catastrophe couldn’t have happened at a worse time for the children of Lebanon, as ordinary families were already struggling to earn enough to feed and clothe
their children.

I’ve met many parents who stare in blank pain at me as they describe how impotent they feel merely trying to protect their children. They face their children dying from diseases that are nothing in the West, but can be fatal depending on where you live.

What these parents need is someone beside them. They are grateful to wonderful Irish donors for malaria nets because they know that, in their world, malaria kills. They give thanks for wells sunk to provide clean water and money donated to provide their precious children with school materials.

When disaster strikes, Beirut might as well be Ballyhaunis. We owe it to our fellow humans to help.

In 2020, all our worlds changed as Covid-19 came into our lives, taking loved ones from many, putting the world into lockdown, terrifying anyone who is older or has health issues.

It’s been a time like no other I’ve known in my 53 years and, despite all the fear and worry, it has been a time of huge kindness in our beautiful country.

Neighbours have been looking out for neighbours. Strangers help with grocery shopping. People working from home sit at their desks with children in the background, small heads peeking around the door to say, “Muuum…” or “Daaad…”.

Our country has suffered, but we still have a place in our hearts for Lebanon, where for so many years brave Irish soldiers served as part of Unifil.

For decades, we have stood side by side with the wonderful people of this small country in the eastern Mediterranean, and I hope we can do so again now. Because, despite everything, when I look into the eyes of our friends in Beirut, little and big, I still see hope. And I know that by working together, we can rebuild.